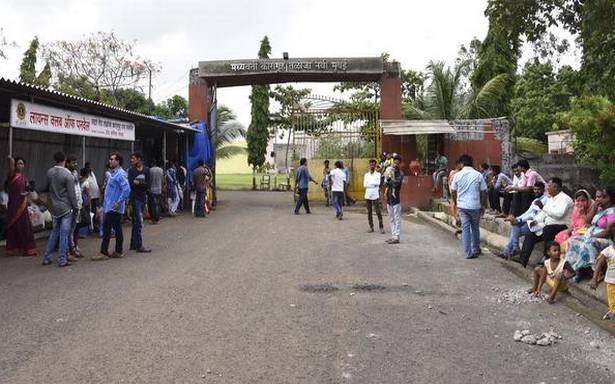 ‘There are no doctors, nurses, support staff or medicines to look after the sick’

The condition of inmates inside the Taloja jail is very grim, claimed friends and family members of those arrested, including 84-year-old Father Stan Swamy, for their alleged involvement in the Bhima Koregaon caste violence of 2018.

Father Joseph Xavier, who spoke to Fr Stan Swamy on the morning of May 14, told the media via a virtual press conference that the 84-year-old Jesuit priest had cough, fever and a running stomach, and that Fr Swamy had told him he was feeling very weak and fragile. Fr Swamy was arrested on October 9, 2020.

“Fr Stan told me that he was given antibiotics, but he was very weak,” said Fr Xavier, and added, “The situation inside Taloja prison is not good, with COVID-19 cases rising. Fr Stan has also been denied vaccination as he does not have his Aadhaar card.”

Harshali Potdar, activist, Republican Panthers Jatiya Antachi Chalwal, said the majority of staff and canteen members at the Taloja jail had tested positive for COVID-19. She said jail authorities were only testing the fit and leaving out the sick.

She added co-accused Sudhir Dhawale (arrested on June 6, 2018), along with Vernon Gonsalves (arrested on August 28, 2018), were in the same barrack where eight others had tested positive, but they were still not being tested. Mr. Dhawale was not being vaccinated because he did not have his Aadhaar card. She said that if they complained, the jail authorities told them they would stop all phone calls and meetings with the family members. This was mental harassment and they needed to be released immediately, Ms. Potdar said.

She said that despite the Central government’s standard operating procedure that inmates would be vaccinated without Aadhaar cards, this was not being done.

Jenny Rowena, wife of co-accused Prof. Hany Babu (arrested on July 28, 2020), said, “The situation in Taloja jail is dangerous. There is no plan, infrastructure or equipment to tackle the situation. A 22-year-old prisoner died of COVID-19 after continuously complaining of throat pain. There are no doctors, nurses, support staff or medicines to look after the sick.”

Talking about Mr. Babu’s condition, she said he had developed an acute eye infection which spread to his face, and after repeated calls and follow-ups from his lawyer, he was admitted to the JJ Hospital, where he tested positive for COVID-19.

Monali Raut, sister of co-accused Mahesh Raut (arrested on June 6, 2018), said, “Taloja jail has no equipment for basic testing of COVID-19 and jail authorities do not allow any medicines, thermometer or oximeter. Every time I send these or go there personally to deliver them, I am told, ‘it’s not allowed.’”

“Like most of the Bhima Koregaon accused, Surendra also has co-morbidities like hypertension, diabetes and asthma. They have been denied the basic right to health inside prison. They all should be released on bail,” said Minal, wife of co-accused Surendra Gadling (arrested on June 6, 2018).