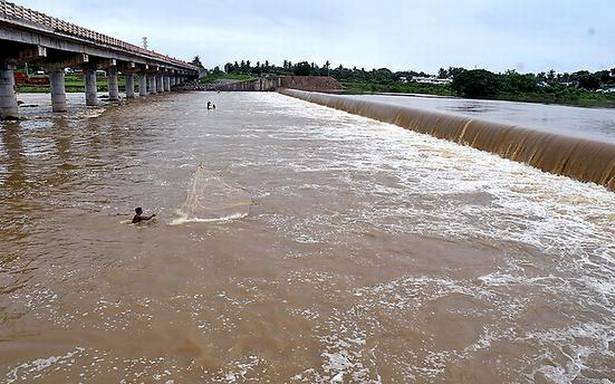 Inflow into the reservoir hovered at 8,720 cusecs

Continuous heavy rain over the past 48 hours in Taliperu river’s upper reaches pushed up the water level in Taliperu reservoir at Pedamidisileru village in Charla mandal to its brim on Wednesday morning.

Almost all the forest streams including Chintavagu and Rotenthavagu were in spate as heavy rain lashed the Taliperu’s catchment areas straddling the forest region in the upstream of Taliperu, a tributary of the Godavari, for the second consecutive day.

The inflow into the Taliperu reservoir from the upper reaches hovered at 8,720 cusecs on Wednesday morning.

Excess water of 11,248 cusecs was released downstream by lifting as many as 16 crest gates of the reservoir, after the water level increased to 73.49 metres as against the Full Reservoir Level (FRL) of 74 metres at 9.30 am on Wednesday, sources in the Irrigation Department said.

The Taliperu reservoir, the medium irrigation project considered as the lifeline of farmers in Charla and Dummugudem mandals, has an ayacut of little over 24,000 acres. It caters to the irrigation needs of farmers of the two border mandals in Telangana’s tribal heartland of Bhadrachalam Agency.

Meanwhile, the water level in the Godavari at Bhadrachalam rose to little over 16 feet owing to substantial inflows from the upper reaches of the river. In Khammam district, the Munneru river received heavy inflows from its catchment areas in the erstwhile undivided Warangal district.