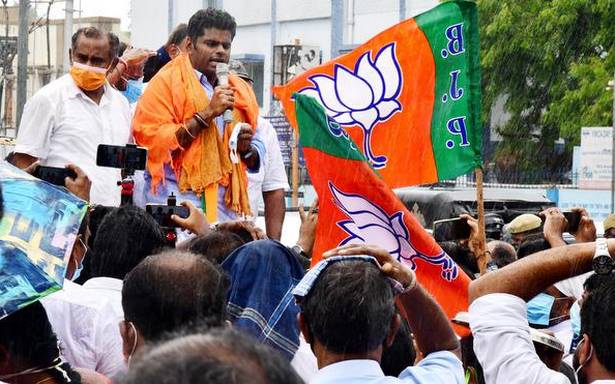 Participates in a roadshow, ahead of taking charge as the BJP State president

He started his roadshow on Avinashi Road in Coimbatore on Wednesday, prior to taking charge at the BJP State headquarters in Chennai on Friday. “We will take the policies of Prime Minister Narendra Modi to every household and every individual,” he said while addressing the cadre.

Asserting that the BJP would be “an important alternative force” in the State by 2024, he expressed confidence that a large number of BJP MPs would be elected from the State in the general election.

At the Thandu Mariamman Temple, he told mediapersons that as the party’s State president, he would be “first among equals.” Regarding a question on being appointed as the State president in spite of his young age, Mr. Annamalai said age would not be a factor as the party depends on “team efforts” and not on any individual. Hundreds of party cadre gathered for the roadshow on Avinashi Road, leading to flouting of COVID-19 safety protocol. Physical distancing norms went for a toss and many were seen without masks.

Mr. Annamalai reached Tiruppur by noon and addressed the cadre near the New Bus Terminus. Criticising the DMK-led State government for opposing NEET and National Education Policy 2020, he alleged that DMK members were being prioritised in the distribution of vaccine tokens.