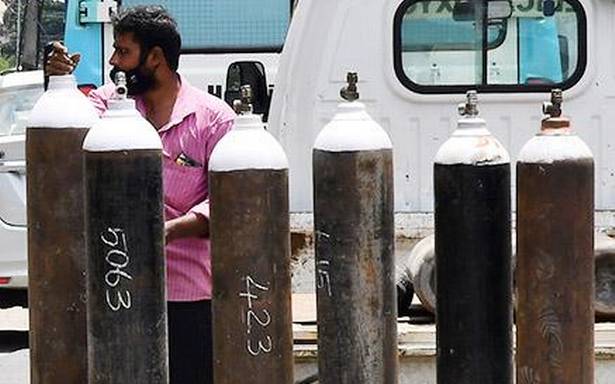 Chief Minister M.K. Stalin on Saturday said the Tamil Nadu government had taken steps to get more oxygen from the Centre and Maharashtra as the regular supply from Odisha had been affected by Cyclone Tauktae.

“I have written to Railways Minister Piyush Goyal for supply of 900 metric tonnes of oxygen, and the letter was personally handed over to him by DMK parliamentary party leader T.R Baalu. Mr. Goyal has promised supply,” he said, addressing a consultative panel of MLAs from all parties at the Secretariat.

Mr. Stalin said steps had been taken through TIDCO to manufacture oxygen, through a joint venture, and the Industries Department had made arrangements to import life-saving equipment, including oxygen concentrators, cylinders, regulators, flow metres and cryogenic tankers, at a cost of ₹40 crore.

The government will buy 2,150 cylinders from Singapore through SIPCOT and another 1,000 through CII, besides 800 from Dubai, 975 from South Korea and 380 from Malaysia. Moreover, the Greater Chennai Corporation will buy 2,675 concentrators for ₹22 crore. Another 5,000 concentrators will be bought from Singapore at a cost of ₹20 crore, and 185 from Lebanon.

He said the use of oxygen at government hospitals had come down because of optimisation.

The Chief Minister said the government had announced a 30% grant for investment for companies ready to make oxygen concentrators and cylinders. Companies launched between January 1 and August 31 could get the grant. Companies that can manufacture 10 metric tonnes of oxygen before November 30 will also get a 30% grant. The companies can get loans at 6% interest and grant through the Tamil Nadu Industrial Investment Corporation.

He said oxygen manufacturing had been planned at INOX in Hosur and SIGGILSOL in Ranipet at a cost of ₹100 crore.