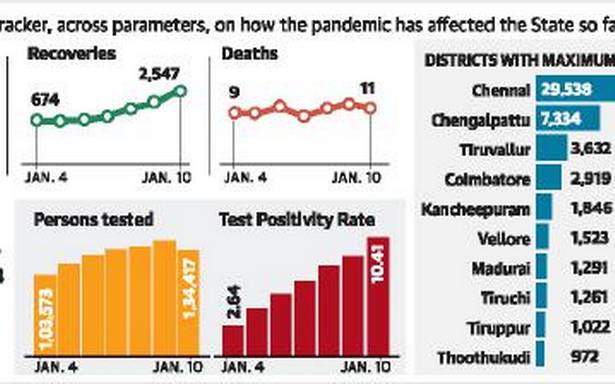 Close to 14,000 people tested positive for COVID-19 in Tamil Nadu on Monday, taking the overall positivity rate to 10.3%. Chennai’s daily caseload remained more or less the same as the previous day’s figure, with 6,190 people testing positive for the infection, while its active caseload touched 30,000.

There were 602 cases in Coimbatore, while 348 people tested positive in Tiruchi and 330 in Madurai. Among those who tested positive for the infection in the State were 32 returnees, including nine persons from Bangladesh and two each from Sri Lanka and the UAE.

The number of patients under treatment/home isolation rose to 62,767. Chennai alone accounted for almost 50% of the active cases.

The number of patients discharged after treatment rose to 2,547.

As many as 20,765 people were covered on the first day of the rollout of the ‘precautionary’ dose.