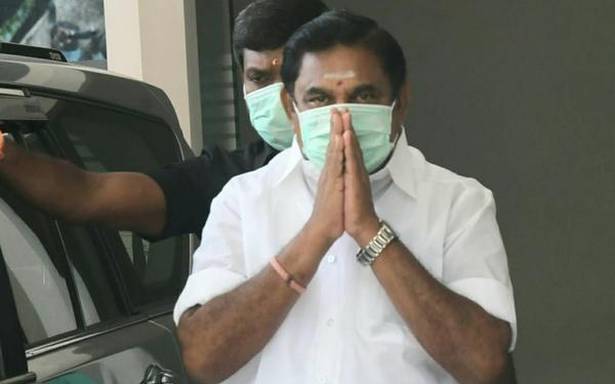 DMK MP Kanimozhi said all political parties in the DMK-led alliance were for allowing Sterlite only to produce oxygen and not for operating any other unit within the campus; BJP president L. Murugan said parties asked for operation of the plant “for four months temporarily”

Many political parties in Tamil Nadu on Monday favoured conditional resumption of medical oxygen production at Vedanta’s sealed Sterlite Copper plant in Thoothukudi in view of the massive spread of COVID-19 infections in the State.

At an all-party meeting convened by Chief Minister Edappadi K. Palaniswami in the Secretariat on Monday to discuss the issue, some parties preferred the resumption of oxygen production under the strict supervision of the State government as a temporary measure. A few suggested that the plant be taken over by the State government.

Based on their inputs, the Tamil Nadu government is likely to take a decision in this regard. The meeting lasted over two hours.

Emerging from the meeting, DMK MP Kanimozhi told journalists all political parties in the DMK-led alliance were for allowing Sterlite only to produce oxygen and not for operating any other unit within the campus.

“Moreover, the Tamil Nadu government should provide electricity to the plant only for producing oxygen. This too should be temporary in nature and it should not be permanent and should not be considered a precedent,” said Ms. Kanimozhi, who is also the Thoothukudi MP, where the Sterlite plant is located.

A monitoring committee on behalf of the State government should be constituted consisting of the Collector, Superintendent of Police, environmentalists, representatives of those opposing the plant and the general public, she said.

Replying to a query, she said it should be allowed, “under the supervision of the Tamil Nadu government” and “technicians from the plant could be used” and with the “cooperation of the people.”

Under the present circumstances, when fresh COVID-19 cases were on the rise across the country, the need for oxygen may be more in the coming days, she said and that would have to be considered. “There is no other way…if there is any other option, that could be pursued,” Ms. Kanimozhi explained while replying to a query on the DMK’s stand.

A press release from the DMK said that its representatives also urged “providing free supply of oxygen produced from the plant to the people of Tamil Nadu.”

The Congress, BJP and the Left parties also took part in the meeting.

BJP’s state unit president L. Murugan said the plant should be allowed to produce only oxygen. “Only after exhausting the oxygen needs of Tamil Nadu it should be supplied to others,” he said. Replying to a query, he said the parties asked for the conditional operation of the plant “only for four months temporarily.”

MDMK leader Vaiko said in a statement that the Tamil Nadu government should take the plant under its control to produce only oxygen since there was a need to produce oxygen. “Engineers and technicians needed for operating the plant could be sourced from public sector undertakings or engineers already with Sterlite on contract. Under no circumstances, Sterlite management should be allowed to operate the plant,” Mr. Vaiko, also a Rajya Sabha MP said.

The Tamil Nadu Congress Committee, which was represented by K.V. Thangkabalu and K. Jayakumar, said the Sterlite plant can be allowed to function on a temporary basis to produce oxygen at a time when saving people’s lives was important and when there is a shortage of oxygen in the country. They suggested that an expert committee on environment headed by the district Collector be constituted to monitor the production and distribution of oxygen from the plant. “No other activity must be permitted inside the plant except for the production of oxygen,” the party submitted in the all party meet.

The all-party meeting followed a case before the Supreme Court where Sterlite sought a direction to allow it to operate the copper smelter plant in Thoothukudi by offering to produce 1,000 MT of oxygen a day from the facility.

Sterlite was shut in 2018 after protests against the plant over complaints of pollution in the vicinity ended in a police firing that killed 13 people.