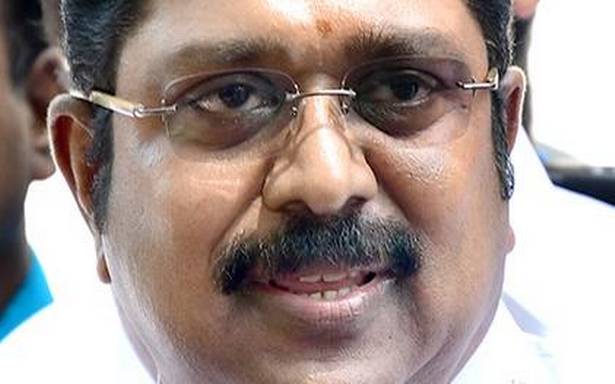 Episode shouldn’t be used to portray AMMK as ‘B team’ of DMK, he says

The Amma Makkal Munnetra Kazhagam (AMMK) general secretary T.T.V. Dhinakaran on Friday described the support provided by his party’s councillor of Periyakulam panchayat union to the DMK’s candidate during the election to the post of chairman of the union as “local adjustment”.

“Such voting happens all the time. It transcends party politics. It takes place in tune with requirements of the people in the area. However, my district secretary had advised our councillor not to support [the DMK],” Mr. Dhinakaran told reporters, replying to questions on the issue of Periyakulam panchayat union chairman’s election.

He expressed surprise over the government’s permission to the DMK for installing a statue of former Chief Minister M. Karunanidhi in Madurai.

Mr. Dhinakaran said a coalition, led by his party, would be formed to face the Assembly election for defeating the ruling party and the DMK. “Even though artificially an opinion is sought to be created about the DMK’s victory but there is, organically, a feeling among people against that party returning to power.”

He replied in the affirmative to a question whether he would welcome Deputy Chief Minister O. Panneerselvam if the latter took a stand in support of his aunt, V.K. Sasikala. Referring to advertisements being issued on behalf of Mr. Panneerselvam describing him as “Bharathar” [a character in the epic Ramayana who ruled Ayodhya in his elder brother Rama’s stead during the latter’s exile], the AMMK leader said it was “true” that Mr.Panneerselvam was like Bharathar but he later crossed over to the camp of Ravana [Rama’s adversary].