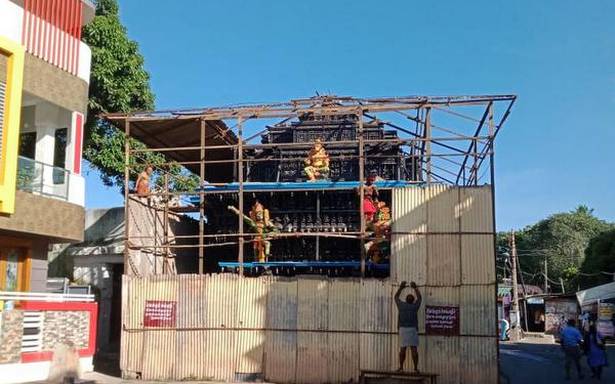 Sheds with transparent sheets to shelter the cars, are also on the anvil, an official of the HR&CE Dept said

The Hindu Religious and Charitable Endowments (HR&CE) Department, is raising the platforms of the cars of the Thanumalayaswamy temple in Suchindram in Kanniyakumari district.

“Laying and re-laying of roads around the temple over the years has raised the level of the streets, and water stagnates in areas where the cars stand during the rainy season. As the stagnant water corrodes the iron wheels, we have decided to raise the platform,” said R. Gnanasekar, Joint Commissioner of the Department.

This follows a visit to the temple by HR&CE Minister P.K. Sekarbabu, in July, when he advised officials to raise the level of the ground to safeguard the three cars of the temple. The project cost is ₹13 lakh.

The Department has also decided to construct new sheds for the three cars. “We have calculated the project cost to be ₹63 lakh in total and sent it to the headquarters [for approval],” Mr. Gnanasekar said.

As per the new plan, the platforms of the cars would be raised by 20 cm. “Instead of laying concrete, we will create a sand bed on the area and pave dressed stone on it,” the Joint Commissioner said.

The shed will be created in such a way that devotees and tourists can have a view of the cars. “The plan is to fix a 1.5 ft transparent sheet around the temple,” he explained.