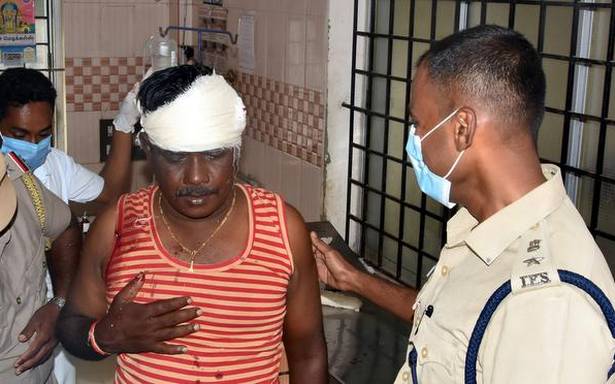 A Sub-Inspector of Police, Tamil Selvan, of R. S. Mangalam police station suffered cut injury on his head after a man attacked him with a machete on Wednesday.

He was admitted to the Ramanathapuram Government Medical College Hospital.

Superintendent of Police E. Karthik, who visited the hospital enquired about his health and stayed there till he was given first-aid.

The SI along with head constable Kannan had gone to Anichchakudi under R. S. Mangalam, after a local man complained about a quarrel in a temple.

The man had complained that when he went to offer prayers at the Kali temple, one Veerappan alias Malairaj, had picked up quarrel with him and also with the temple priest under the influence of alcohol.

“When the police team found that the accused had gone home, they went there in search of him. The man, who was drunk, pulled out a machete from his house and suddenly attacked the SI,” the SP said.

Though the SI tried to escape, he suffered cut injury above his left ear.

Meanwhile, the head constable prevented Veerappan from further attacking the SI. “He is out of danger now,” the SP said.

The assailant had initially fled but was arrested later.