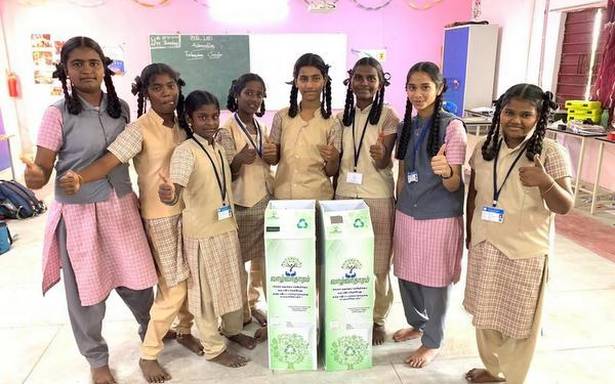 A group of students from Government Girls Higher Secondary School have devised a smart dustbin that displays the recycling value of biodegradable waste. The dustbins will help the people segregate the waste. The innovation was made by Vaazhvatharam, an association of students across Tamil Nadu who are part of the Atal Tinkering Lab.

Atal Tinkering Lab was launched by Atal Innovation Mission (AIM), NITI Aayog, a union government initiative to promote a culture of innovation and entrepreneurship in students. Through the Lab, students would get access to modern tools and technologies such as the Internet of Things, robotics, and do-it-yourself kits which are installed in their schools for their utilisation.

Aashik Rahman, founder of a tech-solutions company based in Tiruchi offered his support in training 483 students from 180 such schools that are part of the Lab. “We provide the students guidance to explore ideas and provide real solutions to problems faced by the society,” Mr. Rahman said.

Work on the project began in 2019, said Mr. Rahman. “It is a time-consuming process. The children must research, understand the design, make a prototype, test it out in real-time and then apply for patents. We conducted the trial run and kept the dustbins at Tiruchi railway junction, bus stands and found them to be useful,” he said. The dustbin is the first of many such projects under way across the State, he added.

The students plan to approach the Tiruchi Corporation to help install these bins in public places.