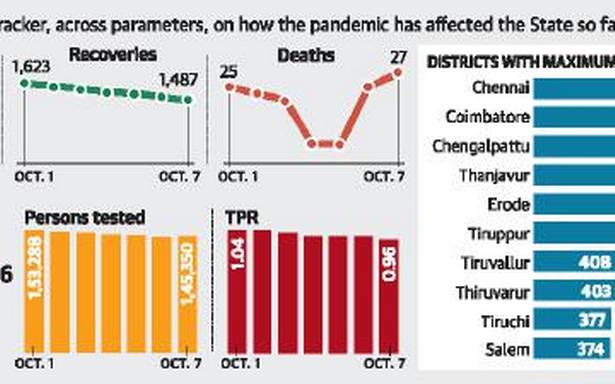 On a day when fresh COVID-19 infections fell below 1,400 in Tamil Nadu, the State’s vaccination coverage crossed five crore.

As many as 1,390 people tested positive on Thursday, taking the State’s tally to 26,74,233. Chennai continued to report the most number of cases at 173. Coimbatore followed with 145 cases, while there were 107 cases in Chengalpattu. In Erode, 85 people tested positive, while Thanjavur recorded 76 infections. There were 75 cases in Tiruppur, 62 in Tiruvarur, 60 in Namakkal and 55 in Tiruvallur.

Another 27 people succumbed to the infection, taking the toll to 35,734. Coimbatore recorded seven deaths, while there were three deaths in Chennai.

Tamil Nadu’s vaccination coverage crossed five crore on Thursday. As of today, 5,01,30,323 people have received vaccines in government and private centres, Health Minister Ma. Subramanian said after inspecting the State Vaccine Store. While 3,73,18,608 people have got the first dose (64%), 1,28,11,715 have got both doses (22%), the Minister said.

The State currently has 50.12 lakh doses of vaccines in hand. If nearly six lakh people are inoculated in the next three days, around 44 lakh doses will be available for the fifth mega drive scheduled to be held on Sunday, he said. A total of 30,000 camps are being planned as part of the mega drive.

He added that as per the third serosurvey, seroprevalence was over 80% in three districts — Virudhunagar, Tenkasi and Chennai — and less than 60% in Perambalur, Ariyalur, the Nilgiris and Karur. So, more vaccine doses have been allocated to the four districts to improve coverage, he said, according to a press release.