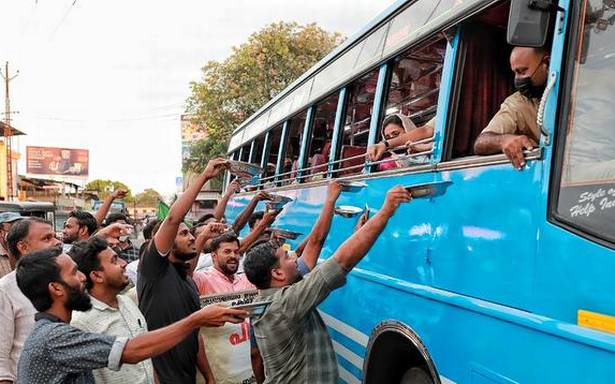 The demand that the State Government slash local taxes on petrol and diesel is threatening to turn into a major political issue.

The Congress and the Bharatiya Janata Party (BJP) wanted the Left Democratic Front (LDF) Government to follow the Centre’s example and reduce the State’s levy on fuel to cushion the inflationary fallout of the spiralling international price of crude.

Both parties have warned of street protests if the State Government did not provide fuel tax relief to consumers. The Government on Friday scrambled to explain its inability to reduce the local levy on fuel and sought to pin the blame on the Centre.

Finance Minister K.N. Balagopal said the Centre had preserved the prohibitive cess on fuel while reducing excise duty, thus denying States their due share of the federal levy.

The CPI(M) has interpreted the Centre’s action as Uttar Pradesh election ploy that ran against the grain of fiscal federalism. There were no immediate elections in Kerala, and the fuel tax campaign targetting the State Government might not be politically perilous for the LDF.

However, the CPI(M) apprehended that the protests could re-energise the flailing Opposition and dovetail with the protest against K-rail. Moreover, people directly felt the squeeze of high fuel and cooking gas prices on essential commodities and everyday goods and services.

Amplified by social and mainstream media, they aired their resentment daily at petrol pumps, hotels, provision stores and markets. The CPI(M) is holding local level party conferences, and it could not ignore the drumbeat of discontent. The party’s State secretariat is likely to calibrate a counter-campaign soon.

United Democratic Front (UDF) convener M.M. Hassan asked the LDF to follow the example of a COVID-19 era thief who stole from a house but returned the valuables to the residents after the pandemic abated, and he tided over his financial difficulties.