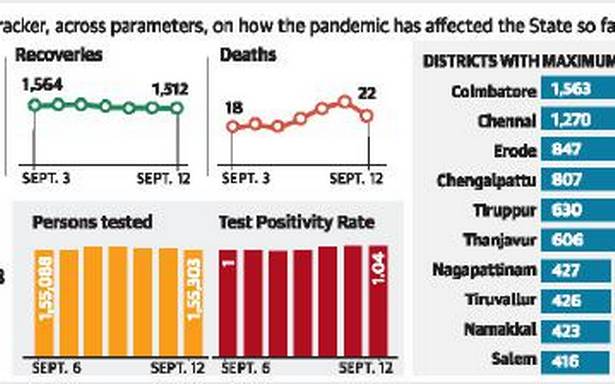 Seven of the 22 deaths recorded in the past several hours occurred at private hospitals and 15 at government hospitals. So far, 35,168 persons have died of the infection. Of the two persons who died of the infection, but had no co-morbidities, was a 21-year-old man from Tiruvannamalai who was admitted to Rajiv Gandhi Government General Hospital in Chennai on September 10. He tested positive for the infection and died on Saturday morning. The hospital cited COVID-19 pneumonia as the cause of death. Among the 20 who died of their pre-existing health condition was a 21-year-old woman who had severe hypertension and chronic kidney disease. She was admitted to Rajiv Gandhi Government General Hospital after testing positive on September 7. She died of COVID-19 pneumonia two days later.

The State has approved two private laboratories for testing: one in Vellore and the other in Coimbatore.