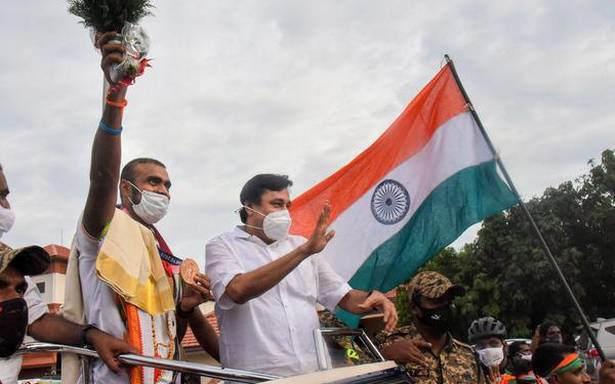 The domestic terminal of the Cochin airport hosted a unique medal ceremony when the Indian hockey team goalkeeper P.R. Sreejesh put the Olympic bronze medal he won at the Tokyo Games on his father P.V. Raveendran on his return on Tuesday evening.

Overwhelmed by emotions, the father returned the favour as the family looked on. Sreejesh exchanged hugs with every member of his family as soon as he emerged from the check-in area.

Apart from the family and friends, well-wishers and fans massed outside the domestic terminal to receive the Olympic medallist. Raised aloft to receive him were countless hockey sticks, placards, and selfie sticks.

Cheers soon erupted when Sreejesh emerged out of the terminal flanked by his family. His mother, Ushakumari, wife, P.K. Aneeshya, daughter, Anusree, and son, Sreeansh, were there to receive him.

But the fans had little time with their hero as he was literally swept into an open jeep that took him to his home at Kizhakkamabalam on a convoy, escorted by the police.

While the reception accorded to the Olympic medallist was fitting, the pandemic protocol went for a toss in its wake raising quite a few eyebrows.