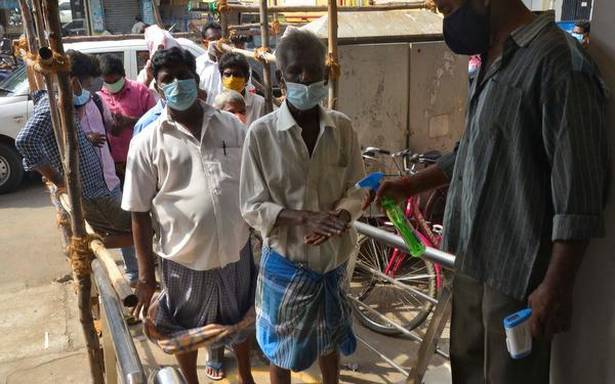 Deputy Commissioner (Excise) T. Sudhakar said the licence of liquor shops would be cancelled if the Standard Operating Procedures for COVID-19 managements were not followed

The Excise Department has formed several squads to continuously monitor the functioning of retail liquor and arrack outlets from 9 a.m. to 5 p.m. during the lockdown period till June 14.

Deputy Commissioner (Excise) T. Sudhakar said the licence of shops would be cancelled if the Standard Operating Procedures(SOP) for COVID-19 managements were not followed.

Mr. Sudhakar and other excise officials inspected the shops to oversee implementation of SOPs when the outlets re-opened on Tuesday, after being closed for weeks to contain the second wave of novel coronavirus in the Union Territory.

Revenue Secretary Ashok Kumar had issued an order on Monday night extending the restrictions up to June 24 with several relaxations. While allowing shops, commercial establishments and home delivery of hotel food from 9 a.m. to 5 p.m., the government has prohibited opening of parks, cinema theatres, multiplexes, auditoriums, libraries and other public gatherings.

The Beach Road would be opened from 5 a.m. to 9 a.m. for morning walkers. The Big Market would be allowed to function by following COVID-19 norms. Religious places would function till 5 p.m., the order said.