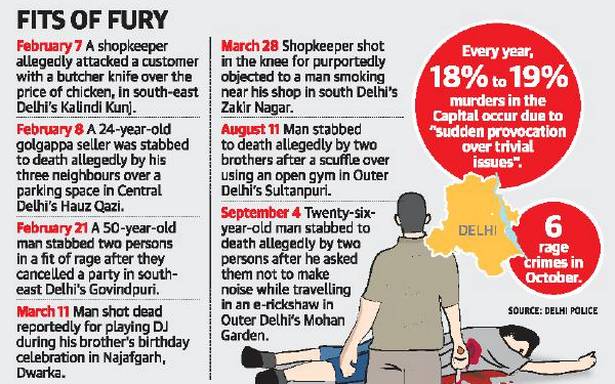 They say proper education, parental control and modern upbringing might be helpful; psychiatrists attribute such behaviour to low contentment levels

Just like any other day, Vibha, 30, was at her grocery store on Som Bazar Road in Dwarka’s Dabri on October 3. Around 10 p.m., Dilip, 45, a plumber, bought cigarettes as he used to, and started smoking. When Vibha objected, and asked him to smoke elsewhere, Dilip, in a fit of rage, took out a saw from his toolbox and slit her throat in full public view.

Vibha’s husband took her to a hospital where she was declared brought dead. The police said that Mr. Dilip, who was inebriated at the time, said that he had also borrowed money from Vibha, a mother of two children, and got irritated when she asked him to return it.

“No incident over such a petty issue has ever occurred here. The woman and the accused had no enmity with each other or with anyone else,” a local shopkeeper said.

Vibha’s murder is among at least six such incidents that occurred as a result of sudden provocation over trivial matters in the Capital in October, the highest this year.

According to police officials, such incidents cannot be prevented as they are spur-of-the-moment crimes where an accused, under sudden provocation over a matter, loses temper, grabs whatever weapon kept nearby, and stabs the victim to death without thinking twice.

“In such crimes, our job is to catch the accused and invoke appropriate legal sections. But such incidents can only be averted at an individual level and various factors such as parental control and upbringing play a role,” DCP (Dwarka) Shankar Chaudhary said.

He said he does not think easy access to weapons leads to a rise in such crimes as not everyone possessing weapons takes such steps. “In Vibha’s case, the accused used a small saw to slit her throat, so we could not invoke the Arms Act as the weapon in that case needs to be more than nine inches long,” Mr. Chaudhary said.

A senior police officer said proper education and a modern upbringing can only help stop such crimes from happening. “People need to introspect as there is a lot of rage in today’s masses. The police cannot be present everywhere and monitor petty quarrels; our part comes only after the spat has turned heinous,” the officer said.

The DCP said in his district, a majority of such crimes occur due to road rage.

“The condition of roads is bad and this often leads to traffic jams…people lose patience and take such sudden steps. Apart from screwdrivers, one can even grab a knife from a vegetable vendor nearby to use it in the attack,” he said.

DCP (North-east) Sanjay Sain said the COVID-19 pandemic led to job losses and subsequent increase in anger and frustration, which in turn led to about a 40% rise in such instances.

“In North-east district, most people belong to the lower strata and want to become gangsters. Hence, they keep knives and pistols with them. We give counselling sessions to first-time offenders,” Mr. Sain said.

Most of such incidents in her district, DCP (West) Urvija Goel said, have been quarrels between couples where a husband comes home drunk and picks up a fight with his wife over a trivial issue and ends up killing her with a vegetable knife. “It’s not possible to prevent such cases.”

In February, Naushad, who runs a roadside shop in south-east Delhi’s Kalindi Kunj, came to one Satto Chaudhary’s shop to buy chicken. However, a heated argument broke out over the price following which Mr. Chaudhary called in his tenant with a butcher knife and assaulted Mr. Naushad, leaving him severely injured.

Special CP (Crime) Devesh Shrivastava said in rage crimes, the perpetrator can use anything as a weapon: from a hockey stick to a rod.

“Such cases only reflect on the individuals and their mental status at that point of time. Though there has been a slight decrease in such incidents over the years, the figure should be smaller than it presently is,” Mr. Shrivastava said.

He said that mental counselling should be provided to the accused while “a better atmosphere should be made available at home”. “Courts must also come down heavily on the accused so that a message goes across that one simply can’t get away with it,” the officer added.

Psychiatrists said such behaviour is the result of a person being “disinhibited” and “desensitised”.

“A person might have a holier-than-thou feeling about oneself but a dissatisfied and a frustrated self is a very vulnerable state. A person is bound to be provoked easily when his or her contentment levels are low,” Dr. Samir Parikh, psychiatrist at Fortis Healthcare, said.

He said that such instances are also encouraged by the apathy of bystanders “which leads to the perpetrator having a free hand to commit the crime in cold blood”.

Dr. Parikh said a lot of such incidents also happen around substance abuse. “A combination of factors such as lifestyle, constant rush, dissatisfaction, economic inequality and lack of happiness contribute to the rising anger. This is only going to increase in the coming years unless we work on mental wellness and reducing stress. You can’t have a policeman at every nook and corner and snooping on people who are fighting,” he said.

Dr. Bhavuk Garg, associate professor of psychiatry, Lady Hardinge Medical College, said in such incidents, a person’s impulse makes him or her act suddenly without thinking about the consequences.

“They can be addressed by regulating the external environment such as better traffic management in cases of road rage or providing therapy to individuals who tend to lose their cool easily,” he said.