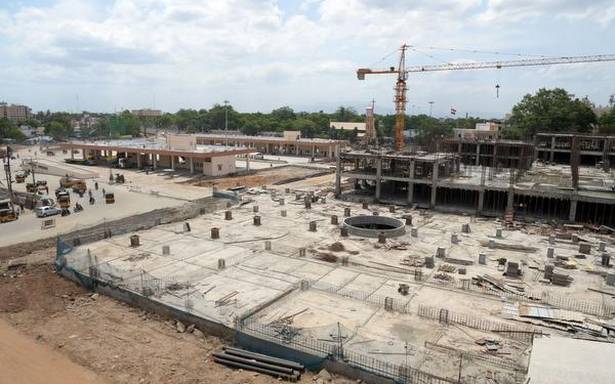 80% to 90% of the works have been completed in most of the projects, says Corporation official

Smart City projects, being implemented on an outlay of ₹974 crore in the city, have picked up momentum after a lull during the COVID-19 complete lockdown.

Madurai Corporation officials said that a majority of the projects are nearing completion and will be inaugurated in the next few months. Out of the 14 projects taken up under the Smart Cities Mission programme in Madurai, only two projects – providing infrastructure and basic amenities at the fruit market in Mattuthavani and smart LED street lights – have been completed. Some of the remaining projects such as reconstruction of Periyar bus stand and shopping complex; laying a heritage pathway; laying ‘smart roads’ on four Masi streets; Vaigai riverfront development; multi-level car parking; water supply distribution in area-based development (ABD) area; construction of a convention centre at Tamukkam; and construction of underground drainage system in 15 wards on the north of Vaigai river are yet to be completed.

A senior Corporation official said that in most of the projects around 80% to 90% of the works have been completed. “For instance, the multi-level car parking and tourism plaza projects are almost over. But they are yet to be inaugurated because of minor pending works,” he said.

Earlier, there were criticisms that smart city projects in the city were going at a tardy pace.

City Engineer S. Arasu said that during the COVID-19 complete lockdown, many of the migrant labourers went back to their native States, thus disrupting the completion of the projects. “But work is slowly picking up now as local labourers have also been hired to expedite the projects,” he said.

Mr. Arasu said that many components of the heritage package had been completed. “We hope that the convention centre at Tamukkam grounds will be completed by this year-end. The construction of underground drainage in the 15 wards will take two more years,” he added.

Corporation Commissioner K. P. Karthikeyan said that he and other Corporation officials are inspecting all the Smart City projects. A plan will be prepared to expedite the projects, he said.