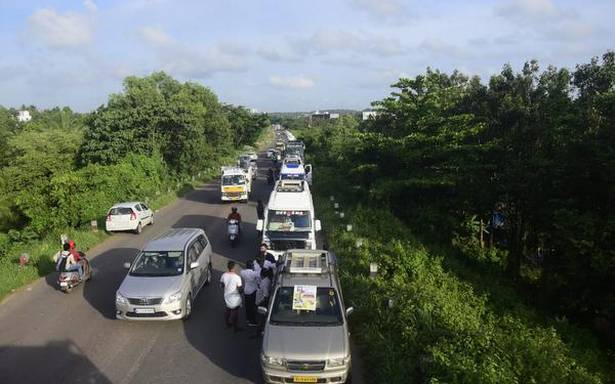 Dragging on for nearly five years, the National Highway Authority of India (NHAI) is still awaiting a nod from the Ministry of Road Transport and Highways to go ahead with the ₹1,850 crore six laning Kozhikode Bypass Project.

However a ray of hope is the assurance given by R K Pandey, member (projects), NHAI, to Kozhikode MP , M.K Raghavan in New Delhi on Tuesday. The construction activities could possibly be started in August, Mr. Raghavan said.

Previously the NHAI had stated that the work on the 28-km corridor from Vengalam to Idimuzhikkal would be started in February.

The meeting between Mr. Raghavan and Mr. Pandey was a follow- up measure. The six-lane carriageway project was hanging fire all these years.

Krishna Mohan Construction Private Limited, the Hyderabad company, which secured the contract had failed to secure a bank guarantee of ₹85.50 crore. As per the contract, the construction of the six-lane bypass should have started in August 2018 and completed in April 2020.

Mr. Raghavan said that for the last three years the company had not been able to start the project. The delay had also been attributed to the lackadaisical attitude of INKEL Limited, a Public Private Partnership company promoted by the State government, he said.

In this context, he said that Mumbai – based Welspun Enterprises Limited was roped in to take over the project. The company had received applause for constructing the Delhi-Meerut Expressway in a record 14 months as against the scheduled 30 months, Mr. Raghavan pointed out.

He said that the Kozhikode Bypass Project would be implemented through a Special Purpose Vehicle. The Kozhikode project was the only six-lane project in the State, he added.

However NHAI sources said that the clarity on starting the project would emerge next month. Discussions in this regard were already carried out at the headquarters. The Ministry would come up with a positive solution, an official said.

Meanwhile the construction work of the six- laning 40.80 km Azhiyur to Vengalam section of the National Highway 66 in Kozhikode district will begin when the State government hands over the land acquired for the ₹1, 838 crore project.

The Adani Enterprises Limited (AEL) had already won the multi- crore highway project six- laning. The project granted under the Hybrid Annuity Mode is part of the Bharatmala Pariyojna of the Centre.