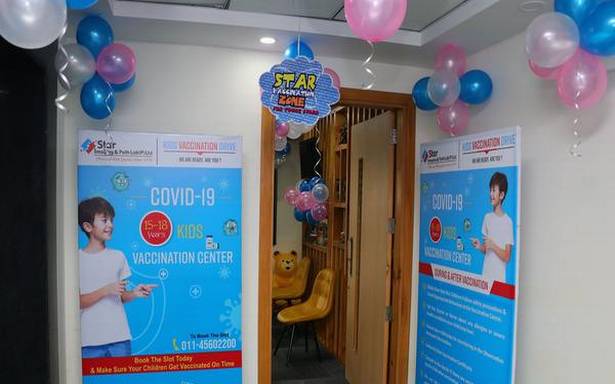 Ahead of the expanded vaccination drive for 15-18-year-olds that commences on Monday, nearly 600,000 adolescents have registered for their Covaxin shots according to data on the CoWIN platform. India’s estimated population in the 14-17 category is around three crore.

The expansion comes even as India’s daily caseload increased to 27,553 and the total number of Omicron cases surged to 1,525. Delhi, Maharashtra, Gujarat, Tamil Nadu and Kerala reported the maximum number of people with Omicron and accounted for close to two-thirds of the national count.

Later this week, the Health Ministry is expected to issue guidelines on “precaution doses” and whether this third dose will be a repeat of the previous two or a different kind. Current evidence suggests that a third dose, same or different, boosts antibodies but the latter gives a larger boost, improving the odds of staving off a symptomatic infection. Two doses, however, continue to protect against disease at least for nine months, the Indian Council of Medical Research said last week, citing local as well as international studies.

Delhi reported 3,194 fresh COVID-19 cases on Sunday with one death. This is the highest single-day rise since May 2020. The positivity rate rose to 4.59% with 69,650 tests being conducted. There are currently 8,397 active cases, out of which 4,759 are under home isolation. Chief Minister Arvind Kejriwal said that the current wave was less severe as few of those hospitalised required oxygen supplementation. Nearly 99.78% beds were vacant in hospitals. No new movement restrictions were imposed on Sunday.The capital has 9,024 hospital beds available for COVID-19 patients. The Delhi government said that it was working to increase this capacity to 37,000 beds to stay ahead of the virus.

In its highest single-day jump in COVID-19 cases in the past six months, Maharashtra reported 11,877 new cases on Sunday as the active case tally climbed to 42,024. Fifty Omicron infections were reported on Sunday, of which 46 are from Pune district, taking the State’s total Omicron tally to 510. However, the number of fatalities remained low, with just nine deaths being reported as opposed to the daily average of 20 deaths last week.

State authorities said that despite a week-on-week rise of 60% in cases, more than 65% of the new cases were either asymptomatic or mild. Hospitals, too, have reported no significant rise in admissions, said health authorities, though doctors caution a clearer picture would emerge only after January 10. Deputy Chief Minister Ajit Pawar, warned that restrictions could get stricter if the uptick in cases continued.

Odisha on Sunday registered a sharp rise in COVID-19 cases, prompting the State government to postpone re-opening primary schools from January 3. As many as 424 persons tested positive for SARS-CoV-2 on Sunday — a 42% rise in infections in 24 hours. On Saturday, 298 persons were found infected by COVID-19 cases.

Daily COVID-19 cases crossed the 400-mark for the first time in two months. Similarly, the State’s cumulative Omicron cases increased to 37. Of the 23 new Omicron cases, 11 are foreign returnees and 12 are local. “There is a high probability of cases going up sharply in the coming weeks. People need to take the maximum precautions to keep the infection at bay,” said Niranjan Misha, State Director of Public Health, Odisha.

Kerala reported 2,802 new cases of COVID-19 on Sunday when 50,180 samples were tested in the past 24 hours. The Health Department also confirmed that its tally of COVID-19 cases caused by the Omicron variant had gone up to 152 as on Sunday, with 45 cases newly testing positive for Omicron. Of the 45 cases, 32 were reported from nations which are included in the so-called “not-at-risk” or “low risk” nations. Health Minister Veena George said that community transmission of Omicron was yet to happen in Kerala as none of the general indicators — hospitalisations, ICU occupancy, oxygen bed requirement — were rising.

Andhra Pradesh reported two more deaths due to COVID-19 and 165 infections in the 24 hours ending Sunday morning. At 0.68%, the daily positivity rate of the 24,219 samples tested in the past day was the highest in the past 33 days. To bolster preparedness, the Health Ministry said it is organising a series of webinars where doctors and medical professionals across States can discuss preparedness with experts from the All India Institute of Medical Sciences, Delhi.

Gujarat recorded 968 cases and one death on Sunday. Active cases increased to 4,753, of which six patients were on ventilator support. Ahmedabad and Surat are emerging as major hotspots for the third wave. In Ahmedabad, active cases have gone up to 2,500.

In Telangana, five more people were confirmed with the Omicron variant on Sunday, bringing the State’s total cases with the variant to 84. After reporting 300 COVID-19 cases over two consecutive days, the case load in Telangana on Sunday dropped to 274. But this was also accompanied by a drop in the number of tests.

Karnataka on Sunday reported 1,187 new cases of COVID-19, taking the total to 30,09,557. The positivity rate for the day touched 1.08%, the Case Fatality Rate (CFR) was 0.50%. While night curfew has already been enforced in the State, the government has indicated that further tough measures may also be taken when a high-level meeting in this regard will be held in about two days.

Tamil Nadu added another 1,594 fresh infections on Sunday, pushing up the tally of COVID-19 positive cases till date to 27,51,128. As on date, 9,304 persons are undergoing treatment, either at home or in healthcare facilities, and 23 persons are being treated for Omicron.