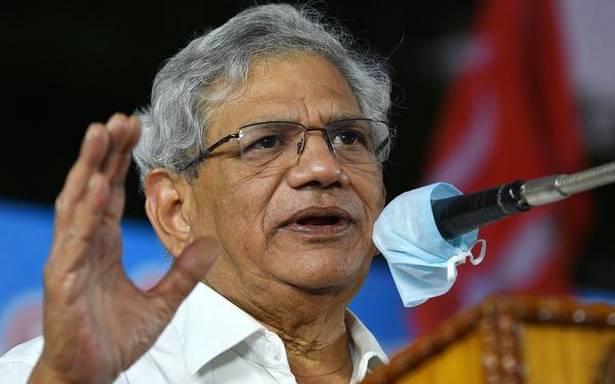 Communist Party of India (Marxist) general secretary Sitaram Yechury on Thursday scotched reports that the party’s central leadership was at odds with the Kerala unit for not including former Health Minister K. K. Shailaja in the second Left Democratic Front (LDF) ministry.

"The question of who will be a candidate in the Assembly election and which elected candidate will serve as Minister in the government is solely in the domain of the respective State committee. The central party leadership has nothing to do with Cabinet formation. It has been the case in West Bengal when the CPI(M) ruled the State for seven terms. The same is the case in Kerala,” he said.

Mr. Yechury said the party had successfully engineered a generational shift in Left electoral politics with an eye on the long term. It had taken a principled decision. The choice would augur well for the party, the LDF and Kerala, he said.

Seventy per cent of the electorate is below the age of 40. The CPI(M) ‘s choice of candidates for the Assembly elections reflected the demographic reality.

Twenty-six sitting MLAs did not contest. They included high-profile party veterans, including the Finance and PWD Ministers. The media had speculated that withdrawing party veterans from the electoral arena would hurt the LDF’s poll prospects. The prediction did not materialise. The people voted for the government’s policy and programme.

Mr. Yechury said the next LDF government in Kerala faced several extreme challenges. It has to rapidly vaccinate the State’s population against the pandemic and rebuild the COVID-19-cratered economy. Moreover, the LDF has to fast-track development and push ahead with welfare measures to succour the pandemic ravaged population.

Mr. Yechury was in the Kerala capital Thiruvananthapuram to attend the swearing-in of the second Pinarayi Government at the Central Stadium in the afternoon.