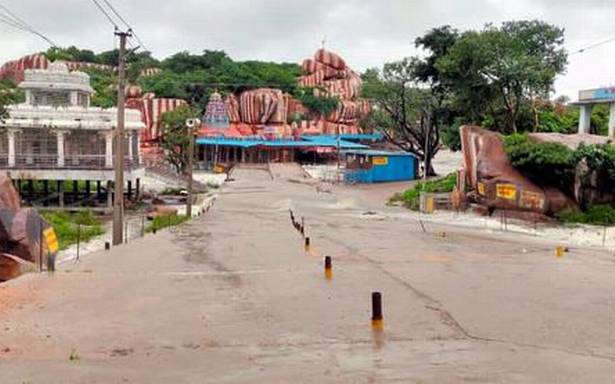 Edupayala temple closed due to flooding, man washed away

Erstwhile Medak district has witnessed heavy to very heavy rain in the past 24 hours with floodwater from Singur entering the temple and flowing over the bridge that connects the temple. It was stated that the rains may continue for another 48 hours and Medak Collector S. Harish warned people not to venture out unless it was emergency.

As of Tuesday evening, the Vanadurga Bhavani temple in Edupayala was closed as floodwater entered the temple premises.

As of Tuesday afternoon, three spillway gates – 7,9 and 11- were opened to a height of two metres and outflow was stated as 34,813 cusecs including 2,822 cusecs for GENCO for power generation. It was informed that Singur may be full by night or Wednesday morning as heavy floodwater is coming from Maharashtra and Karnataka.

A man was washed away and died at Gudatipally Road on Tuesday. He was identified as a native of Pothannapet village in Akkannapet mandal of Siddipet district.

In Sangareddy district, several low-lying areas were inundated and rainwater entered cellars of some apartments.