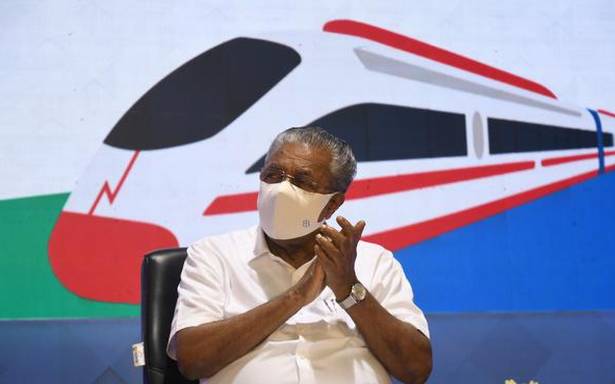 Alternatives suggested such as increasing the speed of trains by straightening the 626 curves on the existing railway network would not yield the desired results, since that could entail more land acquisition than for SilverLine, says Pinarayi Vijayan

Reiterating that there was no going back on the Thiruvananthapuram-Kasargod SilverLine semi-high-speed rail project, Chief Minister Pinarayi Vijayan said here on Thursday that every effort would be made to lessen the project’s impact. A study was under way to try and reduce the number of buildings that ought to be taken over (from the 9,300 envisaged) for the project.

Alternatives suggested such as increasing the speed of trains by straightening the 626 curves on the existing railway network would not yield the desired results, since that could entail more land acquisition than for SilverLine, said Mr. Vijayan at an outreach programme here on the proposed rail corridor.

Referring to concerns about large-scale flooding on either side of the 530-km corridor, which is estimated to cost about ₹63,941 crores, he said a hydrographic survey was on to assess this, wherein high-water marks of floods and high tides during the past century would be considered. The existing railway line too is built on an embankment, he said, referring to concerns of SilverLine’s embankments causing flooding.

In addition, care had been taken to stay clear of ecologically-fragile areas and wildlife sanctuaries. Laying of boundary stones (which has met with stiff resistance in many places) would help assess the extent of land required, and ensure that the project caused minimal social impact, he said.

Speaking of national highways (NH), GAIL gas pipeline and Koodankulam power highway projects that were or are being executed overcoming initial opposition, Mr. Vijayan exhorted people to ponder “if not now, when?” about SilverLine. “We may not be able to make up for lost chances,” he said.

The project would complement the ongoing NH development, coastal and hill highway projects and the Kovalam-Bekal waterway projects. It would initially lessen carbon emissions by 2.88 lakh tonnes, he added.

Terming allegations that MLAs were not apprised of the project details as contrary to facts, Mr. Vijayan said they were taken into confidence, both within the Legislative Assembly and by K-Rail officials who cleared their queries outside the Assembly. The opposition to the project gained steam as the LDF government was re-elected to power, he added.

In his address, Minister for Industries P. Rajeeve said Kerala needed to catch up with most other States on the basic infrastructure front.

Managing director of K-Rail V. Ajithkumar said the SilverLine’s completion cost of ₹63,941 crores included the cost of escalation. It would be able to carry up to 500 lorries (in the roll-in, roll-off mode) every day, while the feasibility of carrying cars in that manner is being studied.

Meanwhile, four Youth Congress activists were arrested following a protest held near the venue of the outreach event.

President of Ernakulam DCC Mohammed Shiyas has demanded also that the government must ensure rehabilitation of people evicted from Moolampilly and nearby areas a decade-and-a-half ago for the Container Road, before going ahead with stone-laying for SilverLine.