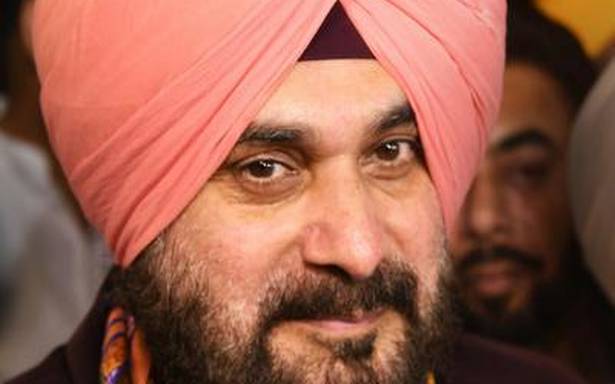 In the letter, Mr. Sidhu sought a meeting with Sonia Gandhi to present to her a “Punjab Model with a 13-Point Agenda to be part of the Congress manifesto for the 2022 Assembly Elections”.

Punjab Congress chief Navjot Singh Sidhu has written to Sonia Gandhi highlighting issues the State government "must deliver upon" and sought a meeting with her to present his 13-point agenda which can be included in the 2022 poll manifesto.

In the letter to the Congress president dated October 15, a day after he had meetings with senior party leaders in Delhi, Mr. Sidhu said it was Punjab’s "last chance for resurrection and redemption".

Days after resigning as Punjab Congress chief, Mr. Sidhu had on October 15 said his concerns have been resolved and the party asserted that he will continue as the head of the State unit. The resolution came after the cricketer-turned-politician met Rahul Gandhi and raised his concerns.

The letter to Sonia Gandhi reminded her of the party’s 18-point agenda "given to the last chief minister" of Punjab and said that those were "equally relevant today".

"Today, I write to your esteemed self with priority areas among the 18-point agenda of the 2017 campaign and the manifesto promises which the state government must deliver upon."

Mr. Sidhu then said the people of Punjab demand justice for the 2015 police firing at Kotkapura and Behbal Kalan in Faridkot following the desecration of the Guru Granth Sahib during the previous SAD-BJP regime.

On the drugs issue, the Punjab Congress chief said, "The big fish mentioned in the STF report must be immediately arrested and given exemplary punishment." He also wrote that the State government must reject the "three black farm laws" of the Centre "by announcing that they will not be implemented in Punjab at any cost".

The State government must release a white paper on power purchase agreements and cancellation of "all faulty PPAs as promised by us", Mr. Sidhu said in the letter.

"Thus, I request you kindly consider these points and give your august direction to the state government to act in the best interests of the people of Punjab immediately," he wrote.

In the letter, Mr. Sidhu sought a meeting with Sonia Gandhi to present to her a "Punjab Model with a 13-Point Agenda to be part of the Congress manifesto for the 2022 Assembly Elections".

The Punjab Congress chief described the "13-point agenda" as separate from the manifesto by "means of its long-term vision to be implemented over a longer period, crafted through years of consultations with academics, civil society, party workers and feedback from the people of Punjab".

Mr. Sidhu had posted his resignation as State unit chief on Twitter on September 28. He was not happy with the appointment of the new Punjab Police chief and the advocate general, besides some portfolio allocations to ministers after the new cabinet formation.

During the meeting with Congress senior leaders K.C. Venugopal and Rawat, the Punjab Congress leader had raised his concerns over the 18-point agenda taken up by the leadership on which actions are pending.

These included action against those involved in the sacrilege issue and the drugs mafia.