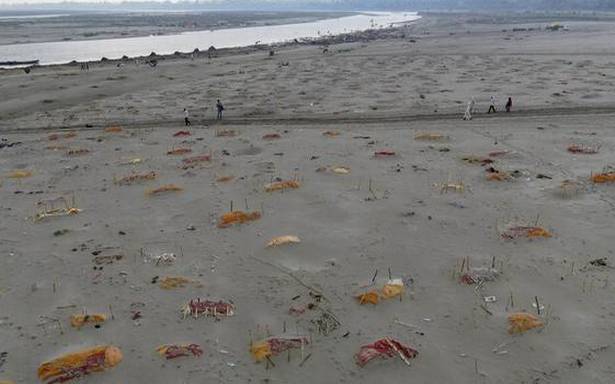 The administration in Prayagraj has allegedly removed the customary saffron and yellow shrouds from bodies buried in the sand on the ghats of the Ganga. The move comes days after reports that the thousands of dead could be COVID-19 victims.

Visuals widely shared on social media showed cleaners deployed by the administration removing the shrouds, many of them bearing the name of Lord Ram, and the wooden stubs from the mounds in the sands at Shringverpur ghat.

A senior official, however, claimed that only shrouds that were scattered on the ghat were being removed while those on mounds of sand where the bodies were buried were not touched.

“We are only cleaning the dirty clothes and shrouds that people leave behind or abandon on the side of the ghats,” Sub-Divisional Magistrate Soraon Anil Kumar Chaturvedi told The Hindu.

Mr. Chaturvedi älso said such cleaning drives are not new.

Asked what had triggered the present drive, Mr. Chaturvedi said the place looked dirty off late and cited the media attention the ghats were receiving.

After several bodies were found floating in the Ganga in different parts of Uttar Pradesh over the last few weeks followed by the discovery of shallow graves on its sandy ghats in Unnao, Kannauj, Prayagraj and Rae Bareli among other districts, the government has announced monetary support for people unable to afford the cost of cremations in order to dissuade them from disposing off bodies in the river.

At many places, the administration has stopped burials on the ghats and set up pickets in several districts and patrolling by police on boats.

Tweeting a video of the shrouds being removed, Priyanka Gandhi Vadra, Congress general secretary, questioned the “cleaning” on the ghats.

“Did not get treatment when alive. Many did not even get last rites with honour. Did not find a place in the government data. Now, even the Ramnami is being snatched from their graves,” she said.

Ms. Vadra said this was disrespect of the deceased, religion and humanity.