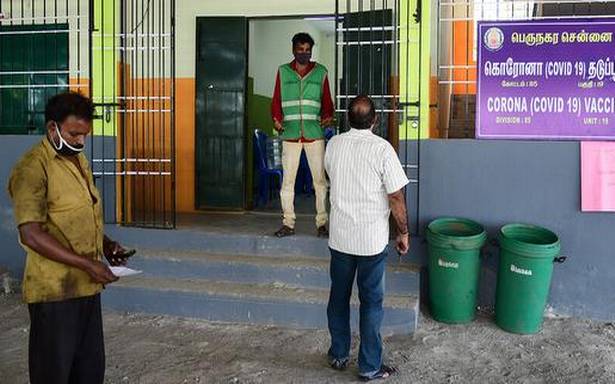 It is four days after the State and Union governments announced that vaccines would be provided for people in the 18 to 44 years age group. The long queues in capital Delhi have left Chennaiites wondering when their turn will come.

A few have taken to social media to complain. Some joked about the drive while others aired their disappointment. On Tuesday, quite a few in the over 45-plus years age group, who were eligible for the second dose, were disappointed that they could not register through the CoWin app.

A resident of Chinmaya Nagar tried to register for her second dose of Covishield on Tuesday. The app did not allow her to register in the private hospital where she got her first shot. “I checked on the app. There is no open slot at all,” she said.

When she called the hospital, she was told there was no stock. She then tried to register at the nearby Urban Primary Health Centre. “My PHC doesn’t appear in CoWin. It did last time but has vanished now,” she said.

P. Viswanathan, convener of the Chitlapakkam Residents’ Association Coordination Committee, has been getting calls from youngsters and adults.

In Velachery, apartment complexes were covered in the initial drive but have now been told to wait for the second dose as vaccines were not available.

With Covaxin in short supply, there is apprehension whether they would receive their second dose.

Some aged around 25 years had registered on the CoWin app in April last week for the vaccine with a hospital in Tambaram. While their slots were confirmed and they were hoping to get the jab on May 1, they received an SMS informing them that their registration had been cancelled. “How can they cancel the registration without the knowledge of the beneficiaries,” a person wondered. “The message should have been that the vaccination had been postponed and the new date would be informed later,” he said.

Karthik, a resident of south Chennai, took to Twitter after he failed to get vaccinated.

He made an appointment on May 1 at Billroth Hospitals. His second appointment the next day was with Apollo Speciality Hospital. On May 3, he registered with Apollo Spectra, hoping he would be lucky. “All cancelled, citing no vaccines available,” he tweeted. Sameer Saran, another Twitter user, responded, “The world’s largest vaccinate programme requires #vaccines… just putting it out there…”

Meanwhile, some older residents who got their second shot received vaccination certificates that mentioned that they had received their first dose. A 62-year-old man received his first dose of Covishield on March 15 at the Tambaram Government Hospital. The provisional certificate generated the next day indicated that his second dose was 28 days later. He had provided his Aadhaar card for registration.

On May 1, he got his second dose, this time at the Peerkankaranai APHC as the Tambaram GH did not have stocks. This time, too, he provided his Aadhaar card for registration. To his shock, when he downloaded the certificate from the CoWin app the next day, it said he was due for his next shot between May 29 and June 26.

“He has given his Aadhaar for registration on both occasions. How is it that the government is unable to identify the beneficiary correctly? We need rectification as this certificate would be valid if we have to travel,” Mr. Viswanathan said.