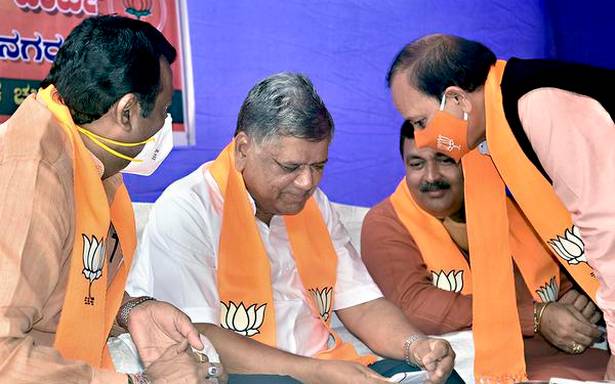 People will vote for us for the development works carried out: Munenakoppa

The former Chief Minister Jagadish Shettar has expressed the confidence that the BJP will win the Hubballi Dharwad Municipal Council elections for the third time because of the development works it has facilitated in the twin cities.

Speaking at the election office for the municipal council polls at Deshpande Nagar in Hubballi on Friday, Mr. Shettar said that even when the BJP had split into KJP and BSR Congress in 2013, the party had come to power in Hubballi Dharwad.

Regarding the candidates, he said that barring two all others were educated. “There are 28 graduates, two candidates with MBA, one engineering and one medical graduate and four diploma holders. Of the candidates, 13 have completed PU and 29 have passed SSLC. The party’s manifesto will be released in two days,” Mr. Shettar said.

Mr. Shettar, who was also Industries Minister in the B.S. Yediyurappa Cabinet, said that residents of Bhairidevarakoppa and Rajadhani Colony have threatened to boycott polling citing lack of infrastructure. They were being pacified by assuring them of immediate development works after the election, he said.

On the charge by Aam Aadmi Party about BJP leaders pressuring its candidates to withdraw from the elections, the Minister said that there was no room for goondaism in the party and the allegation of threat was false.

Minister for Handloom, Textiles, Sugarcane Development and Sugar Shankar Patil Munenakoppa said that the elections are being fought based on the good work done by the former Minister [Jagadish Shettar] and Union Minister Pralhad Joshi. “A lot of development works, including 24 x 7 water supply, Smart City works and airport development, have taken place in the twin cities. We are confident that the people will vote for the good work carried out,” he said.