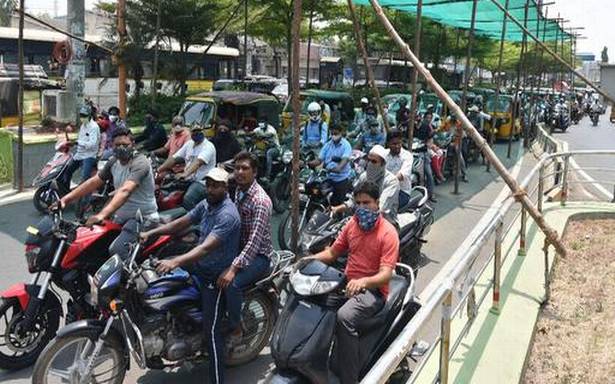 The day temperature crossed 40 degrees Celsius in Anantapur and Kurnool districts for the first time this season on Wednesday, with the majority of the towns in both the districts registering a maximum temperature of 41 degrees C.

At the traffic signals of the busy junctions at Raj Vihar and Five Road Junction on the road leading to the National Highway, temporary wooden structures have been erected to support a green shade net cover generally used for plants in the ‘Greenhouse’, as the waiting time for the two-wheelers is very long.

A 20-foot high and 30-foot long corridor has been put up at two places, and work is on at other junctions in Kurnool.

“During the waiting period, the scorching sun rays have a debilitating impact on the commuters, hence we have thought of providing some shade to two-wheeler riders, as they are fully exposed,” said Anantapur Municipal Commissioner PVVS Murthy. The civic body has put these shades on all the four sides of the junctions on the roads leading to them.

In Anantapur the wok on three main junctions at Sapthagiri Circle, Srikantham Circle, and Tower Clock has been completed in the past two days, and work is on at other places, where the traffic is heavy and waiting time long, the Commissioner added.

The commuters are more than happy, and Sk. Shafiullah a daily commuter expressed happiness at the thoughtfulness of the corporation to come up with the idea.