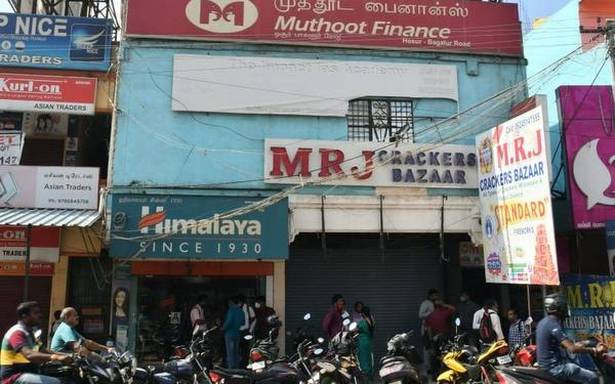 Seven members of an armed gang who robbed 25,091 grams of gold jewellery worth around ₹7.5 crore and ₹96,000 cash in broad daylight from a Muthoot Finance Limited branch at Hosur of Krishnagiri district in Tamil Nadu on Friday, were arrested on the outskirts of Hyderabad on Saturday.

The inter-State dacoity gang, which was trying to flee to Jharkhand and Bihar via Hyderabad on National Highway 44, were nabbed by the Krishnagiri police in a joint operation with their counterparts of Hyderabad and Cyberabad Commissionerates of Telangana Police.

The masked gang members robbed off the gold on Friday morning after holding the Muthoot staff at gunpoint and took away the digital video recorder of the surveillance cameras from the branch. Then, they tied down and locked the employees inside and escaped from the scene on their bikes.

Police zeroed in on a gang from Bihar who was involved in similar offences in other States, and based on the toll gate data and technical aid the accused vehicles were tracked on National Highway 44 moving towards North India.

In the wee hours of Saturday, the accused, Rup Singh Baghal (22), a student, and Shankar Singh Bayyal Baghal (36) from Adhardhal village, Jabalpur in Madhya Pradesh, Pavan Kumar Biskarma, Bupendhar Manji (24), and Vivek Mandal (32) of Ranchi, Jharkhand, who were travelling in an SUV were intercepted at Tondupalli village in Ranga Reddy district, while Tekram (55) and Rajeev Kumar (35) from Mirat in Uttar Pradesh who were travelling in a container lorry were nabbed near Medchal.

The stolen gold jewellery, seven firearms, and 89 live rounds were recovered from their possession of the accused.

Cyberabad Commissioner of Police VC Sajjanar along with Tamil Nadu Police will address the media in connection with the arrest at 4 p.m. today.