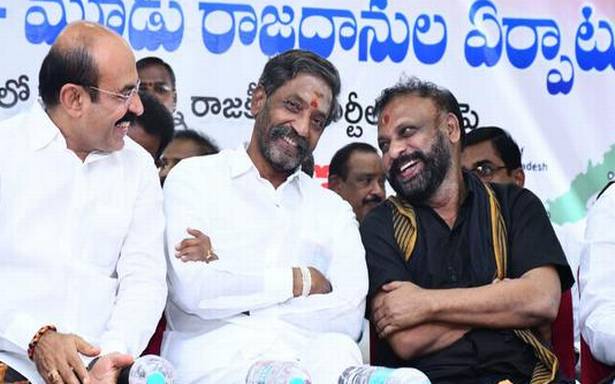 Comprehensive development of all regions in Andhra Pradesh is possible only through the creation of three capitals as announced by the YSRCP govermnent, opined Adhikara Vikendrikana Samithi (Power Decentralisation Association) members at a press conference here on Monday.

Kurnool Mayor B.Y. Ramaiah hit out at Telugu Desam Party (TDP) national president Nara Chandrababu Naidu for ‘compromising the development of the Rayalaseema region and the State as a whole by forgetting the agreements reached under the Sribag Agreement’, and urged him not to come in the way of the growth of the region.

MLAs Katasani Rambhupal (Panyam) and Jaradoddi Sudhakar (Kodumur) and former MLA S.V. Mohan Reddy questioned Mr. Chandrababu Naidu if he did not want employment opportunities for the youth of Rayalaseema. “Mr. Naidu, despite hailing from Rayalaseema, betrayed the people of the region by not completing the projects or setting up any industries,” alleged Mr. Ramaiah.

Mr. Ramaiah said that he had launched a 50-day agitation against his own party during the State bifurcation and now, with the support of the party, would launch an agitation for setting up of the Judicial Capital and urged other political parties and members of the YSRCP from Kurnool to come forward and launch a joint agitation for the development of the region.