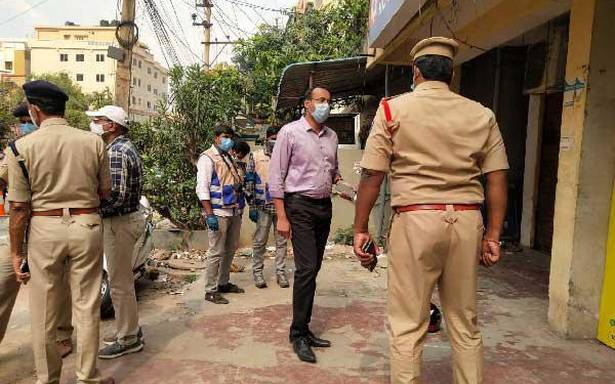 A security guard at an HDFC Bank ATM died in broad daylight during an armed robbery at Kukatpally here on Thursday. Another staffer of a cash management agency suffered bullet injuries and was rushed to a private hospital.

The victim, Ali Baig, an ex-serviceman, died while undergoing treatment, while Srinivas’s health condition is said to be stable. Two bike-borne suspects fired three rounds on the staff when they were reloading the cash in the machine and fled away with ₹5 lakh.

Speaking to The Hindu Cyberabad Commissioner of Police V.C. Sajjanar, who along with other senior officers visited the spot, suspect that ‘criminals’ of an inter-State gang were involved in the offence.

He said that around 1.45 p.m. two persons came on a bike, opened fire at the ATM staff at Patelkunta under Kukatpally police station limits and looted ₹5 lakh from them.

“Two persons are involved in the offences. We have formed 10 special teams to identify the nab the suspects,” Mr. Sajjanar said, adding that the clues team has recovered a magazine dropped by the suspects, who used a country-made firearm. They also have found a helmet.

The investigators have cordoned off the spot and after analysing the video footage of the surveillance cameras of the area, police found that the suspects used a black coloured Bajaj Pulsar bike.

Locals who hurled stones at the suspects rushed the injured to a hospital. Police said that the duo zoomed towards KPHB main road.