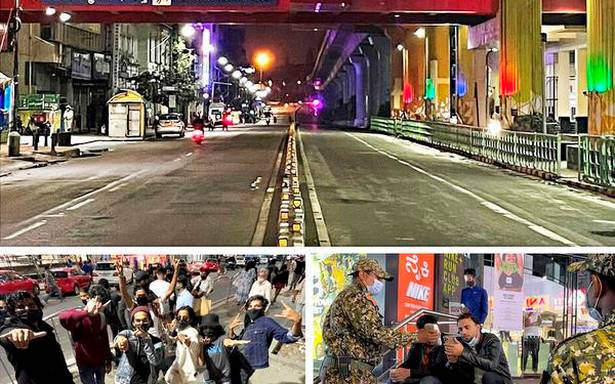 In what has now become a familiar scene, the city ushered in the New Year in a subdued manner for the second year in a row since the COVID-19 pandemic struck. Amidst a strict night curfew and government guidelines to keep a check on the rising number of infections and the Omicron scare, most of Bengaluru wore a deserted look as the clock struck midnight signalling the arrival of 2022.

The city police imposed Section 144 from 6 p.m. onwards and started ensuring that people did not gather outside. By 9 p.m, announcements to shut shop by the 10 p.m. deadline began. Roads were barricaded and strict drunk driving tests were carried out. Those without valid documents were booked for violating the curfew.

The city’s heart of celebrations – Brigade Road – where a large number of revellers gathered to celebrate the new year each year, almost becoming the symbol of celebrations in Bengaluru, was blocked before 10 p.m.

Most of the restaurants and pubs in the city, especially in the Central Business District, were full to the allowed capacity Friday evening. Only those who had got two doses of the vaccine were allowed in after checking their certificates. There was also a 50% occupancy restriction.

“The business we did this New Year’s Eve is not even a fraction of what we used to do before the pandemic. The industry, already reeling under losses, is hit further with the loss of business this season. But with the Omicron scare, we understand the situation,” the manager of a restaurant in Indiranagar said.

Crowds started thinning out starting from 8:30 p.m., given the 10 p.m. deadline for night curfew. Scenes of revellers sprinting away from the police in popular destinations such as Koramangala as the deadline was up were also seen. Home Minister Araga Jnanendra went on city rounds, including the Central Business District, and oversaw the implementation of the deadline.

City Police Commissioner Kamal Pant said the New Year’s Eve passed off without any major untoward incident. “The focus was to avoid gathering of crowds on the streets and loitering around through the night. With a strict enforcement of the night curfew deadline, we were largely successful in that,” he said.