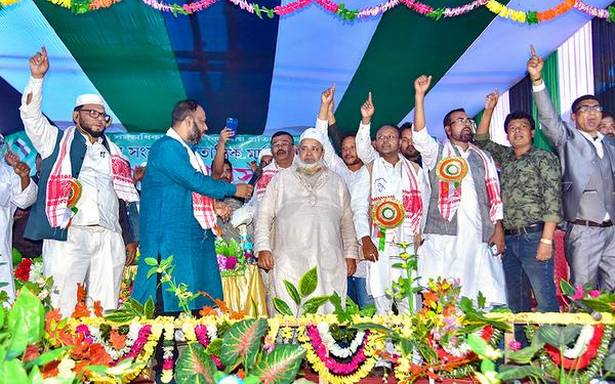 The six parties are expected to meet later this week on seat-sharing arrangements. But the AIUDF is believed to have made the Congress nervous by organising rallies in constituencies the latter won in 2016 and by finding fault with the MLAs from these seats.

“We are a constituent of the grand alliance, so I cannot say if Mujibur Rahman will be the consensus candidate. But you have elected him in advance from the Dalgaon seat. I will say in the meeting of the grand alliance that the demand for Mr. Mujibur is huge,” Mr. Ajmal told a crowd at a rally in Dalgaon.

The Dalgaon seat in northern Assam’s Darrang district is currently held by Ilias Ali of the Congress. Mr Rahman is the projected candidate of AIUDF.

Apart from Dalgaon, the AIUDF is reportedly eyeing Baghbor, Sarukhetri and Mankachar — all Muslim-majority constituencies which the Congress had won in 2016.

Mr. Ajmal, who represents the Dhubri Lok Sabha seat, had held a rally at Sarukhetri a few days ago.

“The chances of Mr. Mujibur winning Dalgaon are high. But what if the grand alliance does not accept his candidature? In that case, would you like a friendly contest,” he asked the crowd, adding that the AIUDF and Congress could go for a friendly fight in three-four other constituencies.

The AIUDF chief seems to have unnerved the MLAs of these constituencies, if not the Congress leadership.

“It is natural that I, as the sitting MLA, will contest the Dalgaon seat. It is confusing why Mr. Ajmal wants to field someone from his party here,” Mr. Ali said. He did not rule out the possibility of a third party taking the seat away if the Congress and AIUDF engaged in a friendly contest.

The upcoming Assembly elections in Assam are likely to be fought among three alliances — one is led by the BJP, another is the six-party mahajot (grand alliance) and the third is the regional alliance between the newly floated Assam Jatiya Parishad (AJP) and jailed peasants’ rights activist Akhil Gogoi’s Raijor Dal (RD).

The Congress has been appealing to the AJP-RD to come on board for a united front against BJP.