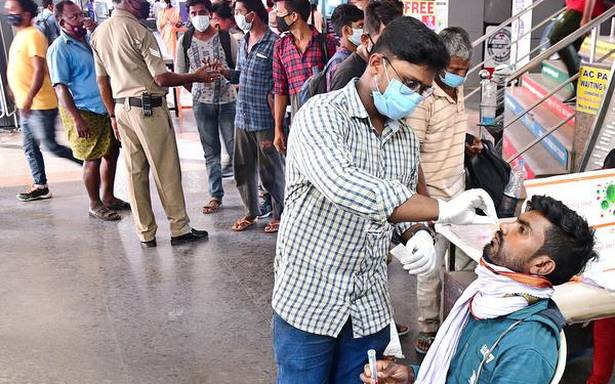 With migrant workers returning to Coimbatore and Tiruppur via trains following relaxations in COVID-19 lockdown, railway authorities in collaboration with Health Department have started lifting swab samples of incoming rail passengers from other States at the Coimbatore and Tiruppur Junctions to help in early detection of cases.

An official from Coimbatore Railway Station said on Thursday the samples were being lifted since Tuesday as per directions of the district administration.

“We are planning to lift a minimum of 250 samples per day,” he said, noting that over 500 samples were lifted as of Thursday.

Along with migrant workers, swab samples of other passengers would also be lifted with their consent, the official said.

Counters to lift the swab samples were placed in the front and back entrances of the railway station, he added.

In Tiruppur, the Corporation officials said swab samples of 345 migrant workers who arrived at the Tiruppur Railway Station on Thursday were lifted.

The workers arrived from Bihar, Odisha and West Bengal and were headed to work in various places in the district.

Of those who were screened, 10 migrant workers were detected with influenza-like illnesses (ILI) symptoms, following which the Health Department personnel noted down their contact details, the officials said.

Tiruppur Corporation Commissioner Kranti Kumar Pati said that inflow of migrant workers into Tiruppur had increased of late as many businesses had resumed owing to the lockdown relaxations.

“As the COVID-19 cases are going down, we want to maintain the number of samples that we are testing so that we can pick up any clusters early,” he said.