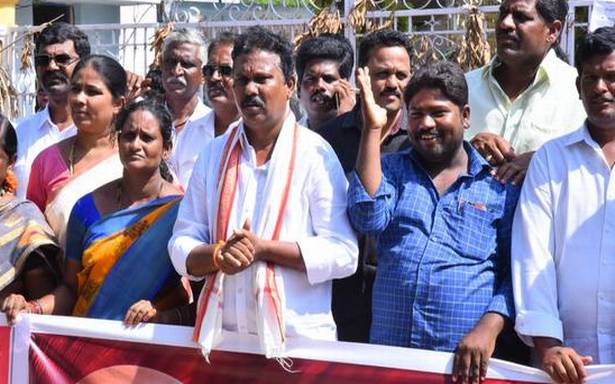 The Kurnool District Sarpanches Association held a massive dharna in front of the Collector’s office here on Thursday seeking immediate release of the 15th Finance Commission Funds, which were released by the Central Government into the accounts of sarpanches.

Development works have come to a standstill and even ensuring daily sanitation, water supply, and maintenance of street lights has become a challenge for the panchayats in Kurnool and Anantapur district, the sarpanches said.

Backed by the Andhra Pradesh Panchayati Raj Chamber, the sarpanches said that while they were voted to power 10 months ago, the State government did not allow them to function as expected as all the funds released by the Centre were ‘diverted for unknown reasons’.

Addressing a protest rally, Mr. Pratap Reddy alleged that the Central Government had allocated ₹1,000 crore for panchayats all over the State, which have been diverted. The State government had recently taken

those funds unconstitutionally without taking the signatures of the Gram Sarpanches and against the resolution of the Gram Panchayats, he alleged.

“If the funds are not transferred immediately, the Andhra Pradesh Panchayati Raj Chamber will hold massive protests in every district centre,” he added.