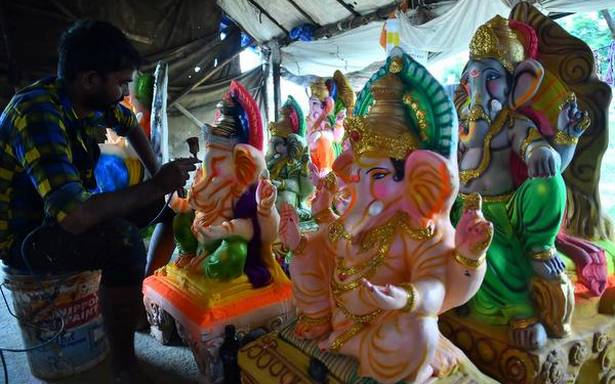 Though Vinayaka Chathurthi celebrations are round the corner, the sale of Ganesh idols is yet to gather pace and artisans are worried whether it would be a second year in a row without business.

The COVID-19 lockdown restrictions and lack of announcements from the State government regarding Vinayaka Chathurthi celebrations has left artisans involved in making Ganesha idols worried as they haven’t received any orders for large-size idols or major orders for Ganesha idols this year. Artisans are hopeful that they would at least be able to get rid of stock made last year as sales was affected due to COVID-19 restrictions during previous year.

Artisans involved in making the idols said that they made only idols of smaller size in negligible quantities this year as the stock from previous year was almost remaining intact.

An artisan from Rajasthan who has been making a living here said, “we are trying to sell off previous year’s stock only as due to COVID-19 restrictions, we earned nothing last year. Almost the entire stock is intact. We did not make any large-sized statues nor new idols this year and very few people are turning up to buy the idols. Our family is almost starving.”

Sonu, another Rajasthani artisan who has been living here for five years, said that they are only selling statues sized between 1-4 ft, ranging from ₹250 and highest up to ₹4,000. He added that the sale has been dull till now and is hopeful that it would improve as the festival nears.

A. Murugan, president of Vinayagar Silai, Bommaikal Thayaripalargal Matrum Virpanaiyalargal Sangam, said that in Salem, idol manufacturing majorly happens in Muthunaikenpatti and no major production has happened this year. Mr. Murugan said that they have requested the district administration and the State government to provide relaxations for celebrating the festival.