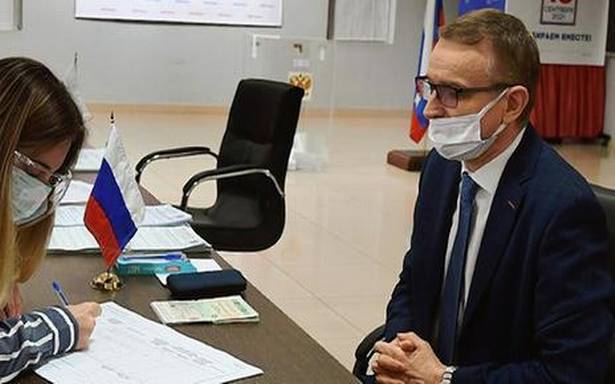 Last round of polling conducted in city

A total of 49 Russian citizens living in India voted in the elections to the Russian Federation’s State Duma, the lower house, at the facility arranged here at the Russian Centre for Science and Culture on Sunday.

The election to the State Duma was conducted from Friday to Sunday. The Russian Consulate General in India had already organised preliminary polling at different places of the country earlier this month to enable Russian expatriates to vote.

For instance, the Russian Consulate in Chennai organised preliminary polling at four places on different dates earlier this month. The places included Auroville in Puducherry, Visakhapatnam, the Russian House in Thiruvananthapuram and at the Kudankulam Nuclear Power Plant in Tamil Nadu. A total of 110 people cast their votes.

To provide an opportunity to those who missed voting earlier and to facilitate Russian citizens in Chennai to vote, polling was organised on Sunday.

Oleg N. Avdeev, Consul General of the Russian Federation in Chennai, who also cast his vote here on Sunday, said that the arrangements were made to ensure that every citizen had the opportunity to vote as every vote made a difference.

Polling was open from 8 a.m. to 8 p.m. Apart from other Russian citizens, Consulate staff and their family members also exercised their franchise.