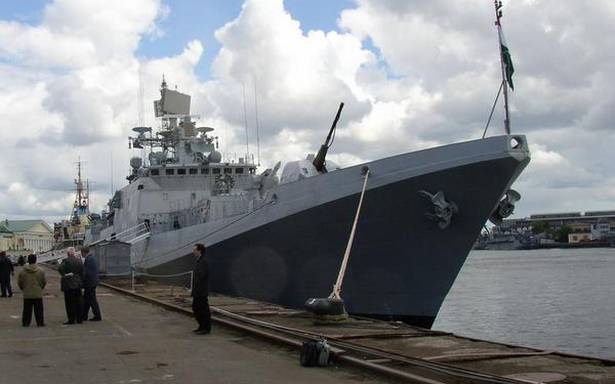 The first of two additional Krivak class stealth frigates being built by Russia is expected to be delivered to India in the middle of 2023, according to the head of United Shipbuilding Corporation (USC) of Russia.

“Due to COVID we had delays in execution of some of the stages of construction. There was an approximately eight month delay. The first ship should be delivered in the middle of 2023,” said Alexey Rakhmanov, Chief Executive Officer of USC at the ongoing Army 2021 exhibition.

In October 2016, India and Russia signed an Inter-Governmental Agreement (IGA) for four Krivak or Talwar class stealth frigates — two to be procured directly from Russia and two to be built by the Goa Shipyard Limited (GSL) — after which a $1-billion deal was signed for the direct purchase.

On the construction at GSL, Mr. Rakhmanov said they would soon be inviting Indian technicians for the ongoing construction of two frigates at the Yantar shipyard to familiarise themselves with the specificity of the equipment and the construction. In the second stage, substantial work would be done at GSL including technology transfer, he stated.

Mr. Rakhmanov added that the frigates were being built to operate both Indian and Russian equipment.

The basic structures of two frigates are already ready at the Yantar shipyard in Russia which are now being completed.

The keel for the first ship to be built at GSL was laid in January and for the second ship in June this year. Keel laying is a major milestone in shipbuilding symbolising formal commencement of the construction process.

The Navy had recently stated that the first of these ships would be delivered in 2026 and the second six months later.

In November 2018, GSL had signed a $500 million deal with Rosoboronexport of Russia for material, design and specialist assistance to locally manufacture the two frigates and in January 2019 the contract was signed between the Ministry of Defence and the GSL.

The engines for the ships are supplied by Zorya Nashproekt of Ukraine. Four gas turbine engines, gear boxes and specialist support will cost around $50 million per ship, as reported by The Hindu earlier.