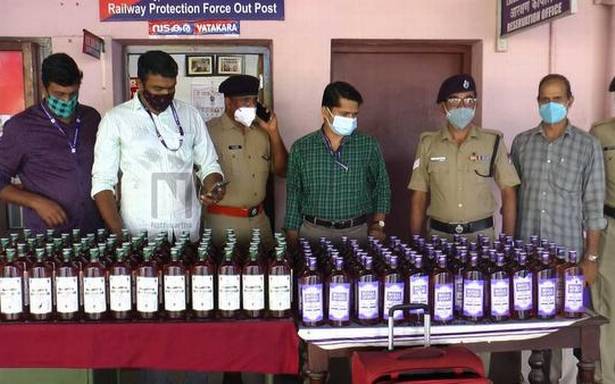 The Crime Intelligence Unit of the Railway Protection Force (RPF) on Saturday seized 125 bottles of smuggled Indian Made Foreign Liquor (IMFL) from Mangala-Lakshadweep Express. The surprise inspection was conducted on the directive of Railway Divisional Security Commissioner Jithin B. Raj at the Vadakara railway station around 1.30 a.m.

With this, the total number of liquor bottles seized from various trains during the second phase of the lockdown reached 1,500. The recovered stock was handed over to the Excise Department for investigation. No one was arrested in connection with the latest incident.

RPF Additional Sub Inspector P.P. Bineesh said the checking squad had seized over 50 bottles in a similar surprise inspection on Mangala Express last Sunday. He added that there was a spike in liquor smuggling attempts subsequent to lockdown curbs on sales outlets in the State.

According to RPF officials, Mangala Express was one of the most misused trains by unidentified persons to ship illegally purchased stock. Despite intensified vigil, there have been attempts to break surveillance networks at various railway stations, they said.