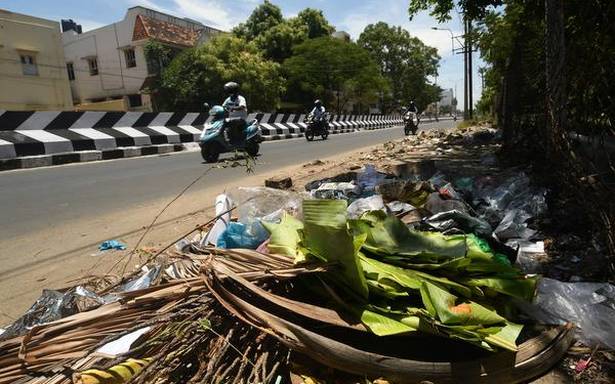 The Walkers Park on the banks of Vandiyur lake in K.K. Nagar is a popular spot in the city for walkers and fitness enthusiasts. But the area close to the entrance of the park has turned into an eyesore due to dumping of garbage.

Two dumper bins that were placed on the Lake View Road close to East 4th Street in K.K. Nagar for the convenience of residents were removed and the public continue to dump garbage at the same place, now on the pavement. People who use the Lake View Road also bring their garbage and throw it on this spot.

A woman residing in K.K. Nagar said that the Corporation should place a dumper bin there. She said that stray cattle and dogs rummage through the pile and scatter them all over the place, while gogs bring the garbage bags into the residential areas.

The Corporation has been urging people to maintain cleanliness in view of the COVID-19 pandemic. But, in the absence of dumper bins, people had no choice but to throw garbage on the roadside, she said.

A regular to the Walkers Park, D. Raghavan, said that the place would become messy when the monsoon sets in. The authorities should act before the rains, he said. Another resident T. Thirumurugan said that it was the bounden duty of the authorities to ensure a clean environment.

The residents said that dumper bins must be placed at many places at a regular gap. The Madurai Corporation authorities said that they would look into the issue and take action soon.