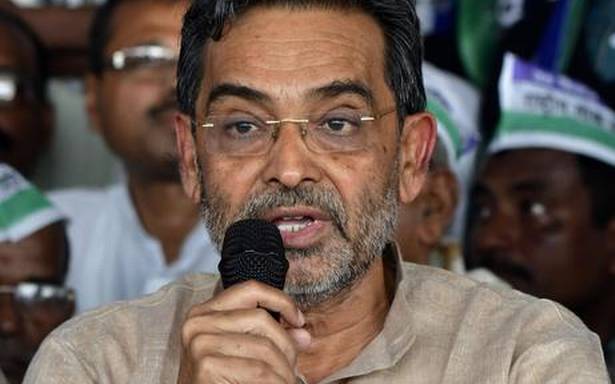 But party denies move to merge with JD(U).

Amid speculation that the Rashtriya Lok Samata Party (RLSP), led by Upendra Kushwaha, will merge with the JD(U), party sources on Tuesday denied such reports, terming them “wrong and baseless”.

A series of meetings between Mr. Kushwaha and Bihar Chief Minister Nitish Kumar in recent times, triggered rumours that the former is likely to be inducted into the State cabinet. An expansion of the Cabinet is expected “any day this week”.

“The news reports about the merger of RLSP are wrong and baseless. The party will continue with its struggle in view of expectations and aspirations of people of Bihar and the country along with RLSP friends,” the party’s official Twitter handle said on February 1.

Sources close to RLSP chief Upendra Kushwaha also denied reports about the merger with the JD(U).

“It’s true that our party leader had, of late, meetings with Chief Minister Nitish Kumar but that doesn’t mean our party is going to be merged with JD(U). The RLSP has planned to organise around 10,000 kisan choupals (farmers meetings) across Bihar in February to protest against three new farm laws introduced by the Centre. Had there been any merger plan with NDA alliance partner JD(U), the RLSP would not have planned such farmers meetings,” said party spokesperson and national general secretary Fazal Imam Mallick.

The RLSP failed to win a single seat in last year’s Assembly poll. Mr. Kushwaha and Mr. Kumar are friends-turned-foes and their recent meetings had sparked speculations in political corridors that RLSP might be merged with JD(U) and Mr Kushwaha would be inducted into Nitish Kumar’s cabinet as Education Minister. Earlier, Mr Kushwaha was Minister of State for Human Resources Department (HRD) at the Centre and he had been raising issues of dismal educational scene in Bihar under Mr Kumar.

However, on Tuesday, sources close to Mr Kushwaha told The Hindu that he (Upendra Kushwaha) might enter Rajya Sabha and his wife could be inducted into the State cabinet.

“Both Nitish Kumar and Upendra Kushwaha have been trusted friends for decades who had gone on separate ways over some political differences but now in changed political scenario they may need each other once again and anything can happen in days to come,” he said.

Buzz over cabinet expansion has been gaining ground. Names of MLAs who recently joined the JD(U) like Jama Khan who had won on a Bahujan Samaj Party symbol from Kaimur, and Independent from Jamui, Sumit Singh are doing the rounds as possible entrants into the ministry.

The lone Lok Janshakti Party legislator Rajkumar Singh too had, recently, met Mr. Kumar. Alliance partner BJP also held a series of meetings with party leaders in Patna and Delhi over names of likely ministers ahead of the cabinet expansion. Name of former union minister and senior party leader Shahnawaz Hussain as next finance and road construction minister of the state has been on top of probable likely ministers list.