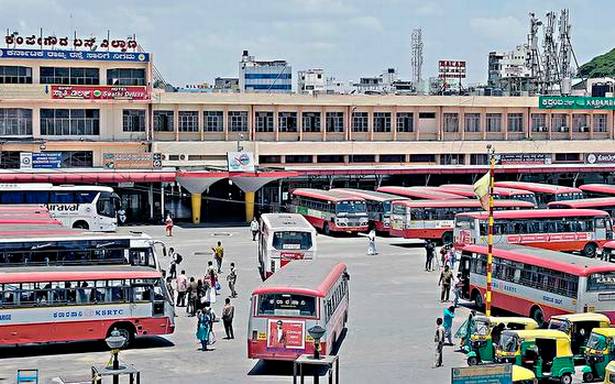 Because of the heavy financial losses, paying staff salaries is a major challenge

Yogeesha (name changed on request) has been working in the Bangalore Metropolitan Corporation Corporation (BMTC) for over 14 years. He would get his salary in the first week of the month, but for the last four to five months, his salary was credited to his account in two instalments.

But he is not sulking about the delayed payment of salary. “In the beginning of 2021, everyone thought that the good days will come back. But the second wave of the pandemic worsened everything. Knowing the poor financial conditions of the corporation, I cannot complain about receiving salaries in two instalments. Instead, I should feel happy that at least I am receiving a salary every month,” he said.

Reeling under heavy financial losses due to the pandemic, paying staff salaries is becoming a challenge for the Road Transport Corporations (RTCs). “I would say, paying salaries to the staff by managing our finances is itself a big achievement of 2021,” said Shivyogi C. Kalasad, Managing Director, Karnataka State Road Transport Corporation (KSRTC).

Mr. Kalasad said the corporation, which was already in a bad shape financially, was hit hard by the second wave. Employees going on strike and the steep hikes in fuel prices added to their woes.

“The corporation has been struggling every month to pay the staff salaries, paying fuel bills, and for other maintenance. Around 55% of the revenue generated goes towards salary and 45% for fuel. The State Government has been supporting us by paying 25% of the salary amount. Every month, the corporation requires more than ₹100 crore to pay towards payment of salaries,” he said. He added that the corporation is raising ₹200 crore to pay arrears pending towards provident fund, insurance benefit and others.

Ridership is picking up; during pre-COVID times, 30 lakh people used to travel in KSRTC buses every day. Now, it has touched 22 lakh. However, inter-State services operated by the corporation are showing no signs of recovery as demand remains poor.

The financial distress has forced the Bangalore Metropolitan Transport Corporation (BMTC) to look for fresh loans for overall development of the corporation, induction of new buses and clearing pending bills, among others. The State Government has given in principle approval for raising a long- term loan.

Anbukumar, MD, BMTC said there is a plan to raise a loan of ₹700 crore from Asian Development Bank. “We are facing a deficit of ₹60 crore to meet our expenses. Despite facing so many hardships, we are managing to pay salaries in two instalments with the State Government’s support. However, keeping in mind future developments, we are planning to raise loans,” he said.

He added that all efforts being made to increase the ridership in the city, including maximum utilisation of the fleet size. For close to two years, a majority of the AC buses remained off the road. A few days ago, the corporation announced a slash in fares by 34% to increase patronage. During pre-COVID times, the BMTC was generating revenue of ₹5 crore per day, and it has touched ₹3 crore now.

Apart from the pandemic-induced challenges, 2021 also saw a 15-day strike in April by employees affiliated with the KSRTC Employees League. Their demands included paying salary as per the recommendations of the Sixth Pay Commission. Repeated pleas by the Government to withdraw the strike were ignored, and the corporations explored all options, including suspension and dismissal of thousands of employees from services for taking part in the strike.

During the strike, stones were pelted at buses and employees who did not support the strike were targeted. A driver of NWKRTC near Jamkhandi succumbed to injuries after miscreants attacked him with stones for reporting to duty and driving a bus.

Many employees say they were not benefited by the strike. Rather, it caused more hardships to thousands of employees who could not get salaries for months after they were suspended or dismissed from the service, they alleged.

When asked about the reinstatement of employees who were suspended or dismissed from service, the BMTC MD said suspension of 4,000 employees was revoked and department inquiry against 11,000 employees has been withdrawn. “Most of the employees have been reinstated,” said the KSRTC MD.