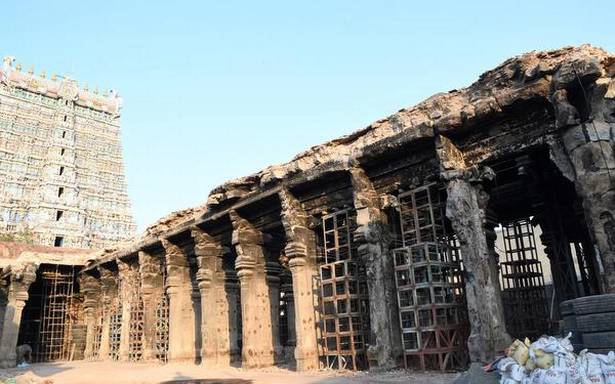 The mandapam, of Sri Meenakshi Sundareswarar Temple in Madurai, was destroyed in a fire in 2018

The restoration of Veera Vasantharayar Mandapam of Sri Meenakshi Sundareswarar Temple in Madurai, would be completed within a year, Minister for Hindu Religious and Charitable Endowments, P.K. Sekarbabu, informed the State Legislative Assembly on Friday. A part of the mandapam was destroyed in a fire in 2018.

Addressing concerns raised by AIADMK legislator R.B. Udhayakumar (Thirumangalam) in the House, Mr. Sekarbabu said stones brought from Namakkal district for that purpose were being used. “It was thought that if the stones were carved in Namakkal, they could be damaged while in transit. So, we decided to bring the stones to Madurai and do the work there,” the Minister said.

To a statement made by Mr. Udhayakumar that steps were taken by the erstwhile AIADMK regime towards the restoration of the mandapam, Mr. Sekarbabu pointed out that though a committee was constituted in this regard in 2018, it never met until the change of the government this year. “It is we who have taken steps to ensure that the restoration is complete,” he said.

While replying to another query raised by CPI (M) legislator M. Chinnadurai (Gandarvakottai), who sought to know whether the government would come forward to consecrate Sivan Thirukkoil at Mangalaakoil in Gandarvakottai union in Pudukkottai district, the Minister assured him: “Our CM is someone, who will take along both believers and atheists hand in hand. On his advice, we are taking several steps to consecrate many temples.”