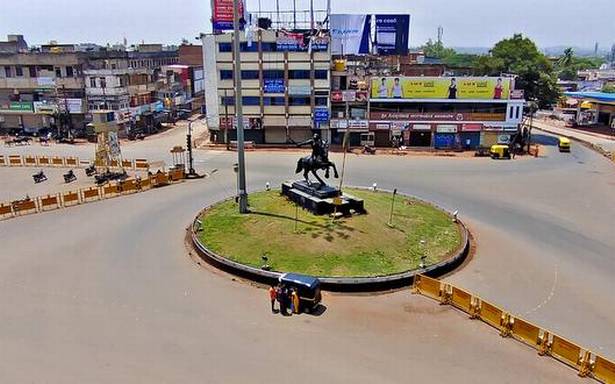 Majority of them follow COVID-19 curfew guidelines and stay indoors

Barring the morning hours, when the administration had allowed people to purchase essential items, people in the districts of Bombay Karnataka stayed indoors and cooperated with the administration by following the COVID-19 curfew guidelines. Some who ventured out on vehicles without a valid reason were penalised by the police.

After 10 a.m., almost all the major roads in the cities and towns had little traffic as people chose to stay indoors in the wake of the curfew. It was only a few goods vehicle and those venturing out for emergency purposes who were seen on the roads apart from the police personnel stationed mostly at important junctions.

On the otherwise busy roads of Hubballi-Dharwad, the announcements by the police were audible from far as there was no other noise on the streets.

Even in extension areas, people did not come out of their houses and meeting points like temples and parks did not see any gatherings.

In most of the junctions, the police intercepted a few vehicles that came their way, questioned the motorists on the purpose of travel, and allowed them to proceed if they had a genuine reason.

However in the evening, a few people tried to venture out, but were stopped by the police and were let off after a warning. Those who had come on their two-wheelers without any valid reason, had to leave the place on foot as the police seized such vehicles. Across all the northern districts, several vehicles were seized by the police for violating the curfew.

Meanwhile bus stations in these districts witnessed very less people. State transport officials had communicated that long-distance buses will be operated depending on the demand. And accordingly some buses were run.