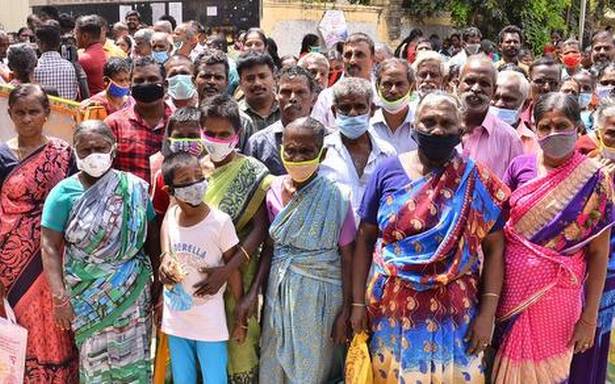 They submit petition to Collector seeking patta for the land

A group of residents from Viswakarma Colony near Palayamkottai submitted a petition to Collector V. Vishnu on Monday appealing for patta for the land on which they have constructed their houses and residing over the past 40 years.

The petitioners, led by M. Esakkimuthu, said they lived in huts in the colony as they were labourers. They constructed permanent houses with loan availed from Palayamkottai Cooperative Housing Society. The houses were give power connection after they paid taxes to Tirunelveli Corporation.

Besides, drinking water connections were given to the houses and the residents had ration, Aadhaar and Electors’ Photo Identity Cards.

“After we submitted petitions seeking patta for the land on which our houses stand on various occasions, Revenue Divisional Officer, Tirunelveli, who ordered survey of our lands, also inspected the spot. At a time when we are awaiting the patta, the residents of Viswakarma Nagar have been told to move out saying our colony is situated inside an irrigation tank though our houses do not obstruct flow of water in anyway. Hence, the Collector should instruct the officials concerned to issue patta for us,” Mr. Esakkimuthu said.

Another group of people from MGR Nagar in Pettai near Tirunelveli submitted a petition to the Collector seeking his intervention to allow them to live in the same place after the Tamil Nadu Housing Board reportedly asked them to move out of the place to facilitate construction to be started shortly.

The petitioners said they were living in MGR Nagar over the past five decades and working in Tirunelveli Corporation as permanent and temporary sanitation workers. Since the Tamil Nadu Housing Board, which built group houses for rehabilitated leprosy patients and multi-storey apartments for the poor, planned to start construction at MGR Nagar also, the residents had been asked to move out of this place.

“Though we are affected by stagnant rainwater every year, we never approached officials seeking alternative place. Hence, the Collector should allow us to live in the same place,” said P. Vanapandi, one of the petitioners.

The Bahujan Samaj Party submitted a petition urging the Collector to take steps for retrieval of panchami lands in Tirunelveli district given to beneficiaries from the Scheduled Caste and Scheduled Tribe communities.

Coronavirus: All the movies, TV shows and festivals delayed or shut down globally
Celebrity News