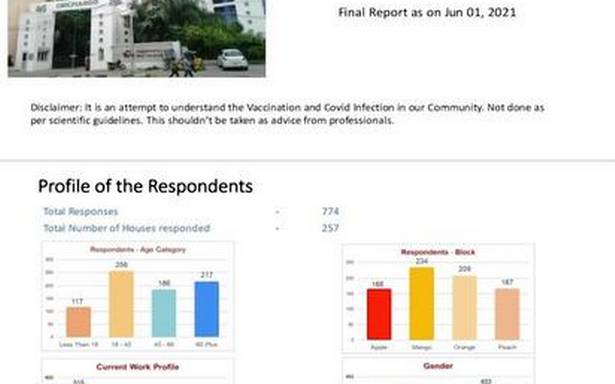 From collecting data and creating bar charts to taking emergency measures, a gated community in Vadapalani makes smart decisions to check a surge in Coronavirus cases among its residents

This imperative is now surely overworked, being expressed in different tongues across the globe. But it is heeded only till the Coronavirus a few safe blocks away. When it lands bang in one’s path, the foot goes for the accelerator when it should, for the brakes — or the other way round. The response is either inadequate or extreme — individuals, families and communities illustrate it. Given the odds stacked up against them, in a variety of circumstances, they cannot be blamed for responding either way.

Against this prevalent situation, Appaswamy Orchards — a gated community in Vadapalani — has responded in a manner that can only be described as “refreshingly rare”. When the situation seemed to have spiralled out of hand, and consternation seemed justified, there was just concerted action, dictated in parts by technology, medical opinion and common sense.

Manikandan Venkataraman, secretary of its residents association, explains that the community experienced a surge in cases through May that peaked at 52 by the middle of the month.

As gated communities go, this one is hardly of Brobdingnagian proportions. As the secretary puts it, “There are 360 units, but only around 300 would be occupied now.” So, 52 was a number of concern. The community however decided to take charge of the situation, the right foot aptly pushing the brake or the accelerator pedal.

As Manikandan explains, the response was two-pronged: Gathering all the information that can be gathered and sending out all the communication that should be sent out.

They started a daily case tracker system through bar charts, which is still being continued. Though helpful, that was the least of the interventions.

“During the surge, we conducted a survey to derive methods that we could try out to stem the tide. We expected participation from 300 flats, and 270 did participate in it — roughly about 800 people, which is a good sample size. The survey provided us with useful insights,” observes Manikandan.

From block to block, it sought to ascertain how many were vaccinated; and how much — whether partially (one dose) or fully vaccinated. Even breakthrough infections were factored in. The data was segregated on the basis of age groups eligible for vaccination.

All of this information was tabulated into bar charts so that residents could get the picture at a glance. Certain findings from the survey helped the managing committee shape its response to the unfolding crisis.

“Initially, we arranged for food and essentials to be delivered at the COVID-affected flat by the housekeeping staff. They order online and the deliveries would be kept outside on those tables and then be door-delivered. With the increase in cases, we arranged for the entire apartment complex to have essentials delivered at residents’ doorsteps,” elaborates Manikandan, adding that this was among measures to keep residents indoors to the greatest extent possible.

The proof of the pudding is in the eating — the results have indeed left a delectable taste in the mouth.

“From 52, we brought the cases down to zero, which was the figure even the day before yesterday. Only yesterday (June 3) four new cases cropped up — they are members of two families. So, we are at four cases now,” Manikandan gives this status report on June 3.

The community has extended the scope of the survey with its support staff being asked to take it. Elaborates Manikandan: “Through this survey, we are trying to find out how many of the support staff have got vaccinated. The housekeeping and security people got vaccinated at the camp organised at the community. The support staff, which include the house-keeping staff and the security personnel, would number 30, but we are setting our sights beyond that, and are factoring the iron vendors, car cleaners and other workers on the periphery into the picture.”

The objective seems to be clearly 100 percent vaccination.