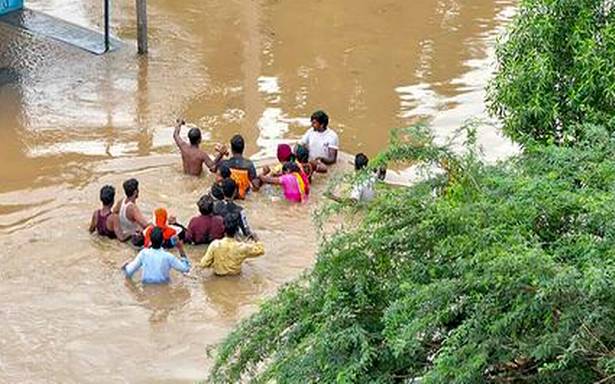 One SDRF person drowns during rescue operations on outskirts of Nellore

Relief operations picked up pace as rains abated in most parts of the district as also in the upper riparian districts bringing down the inflow into Somasila reservoir by over 1.80 lakh cusecs to 3.89 lakh cusecs on Saturday evening.

Many villages downstream of the river were inundated following an inflow of 5.12 lakh on Saturday morning from a peak inflow of a record 5.50 lakh cusecs on Friday. Over 5.49 lakh cusecs was discharged following heavy water discharge from upper riparian districts of the Penna basin.

As many as 7,142 people from 29 villages, which were worst-affected, were put in 18 relief camps set up in the flood-affected areas the district. The relief camps would be run in Nellore urban, Nellore rural, Kovur, Buchireddipalem, Vidavalur, Anantasagaram, Chejerla, Indukurpeta mandals till the floods receded, SPSR Nellore District Collector K.V.N.Chakradhar Babu said while overseeing the relief operations.

As many as 145 of the 1,780 tanks overflowed and caused inundation following continuous downpour in the last 15 days, he said. Now with rains abating, the district administration expected the floods to recede in the next 24 to 48 hours. The water flow in the Swarnamukhi and Kalingi rivers was being monitored closely.

Crops in about 12,000 hectares were damaged following heavy rains, and roads on a stretch of 14,210 km were also damaged, a report compiled by the district administration said. The farmers would be provided input subsidy after a detailed enumeration of the crop losses, the Collector said, adding that health camps would be organised to avoid the spread of seasonal diseases.