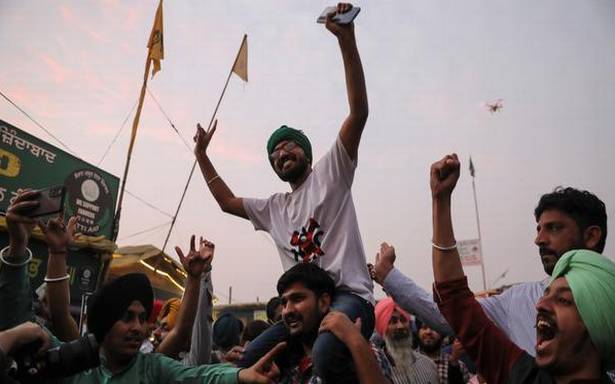 Maharashtra Chief Minister Uddhav Thackeray, who is also the president of the Shiv Sena, had said, “The announcement of repealing the three farm laws underscores the power of a common man in the country”

The Shiv Sena on November 20 described the Centre’s announcement to repeal the three contentious farm laws as the "defeat of arrogance of power", and said it was done as the BJP feared a backlash in the upcoming Assembly elections in Uttar Pradesh and Punjab.

Prime Minister Narendra Modi’s decision to withdraw the laws is a victory of the farmers’ unity, an editorial in party mouthpiece Saamana said, adding that this "wisdom" is a result of the BJP’s loss in the recently-held bypolls in 13 States.

The Prime Minister, in an address to the nation on the morning of November 19, announced the government’s decision to repeal the three farm laws, which were at the centre of protests by farmers for the last one year.

"The Union government suppressed the voice of the opposition and got the three farm bills passed in Parliament. The Centre completely ignored the farmers’ protests. Supply of water and electricity was snapped at the protest site. During their struggle, the farmers were even labelled as Khalistanis, Pakistanis and terrorists," the Sena said.

Despite all this, the farmers did not budge from their demand of the withdrawal of the laws that were in the interest of the private sector and capitalists. As many as 550 farmers died during the protests. A Union Minister’s son crushed farmers under his vehicle at Lakhimpur Kheri, but PM Modi did not even condole their death, it added.

"But after realising that the farmers won’t end their protest and sensing BJP’s defeat in Uttar Pradesh and Punjab, the Modi government decided to repeal the laws. This is a victory of the farmers’ unity," it said.

‘Mahabharata’ and ‘Ramayana’ teach us that arrogance ultimately gets crushed, but the fake Hindutvawadis seemed to have forgotten this and launched an attack on truth and justice like Ravana, the ruling party in Maharashtra said.

At least in future, the Centre should shun arrogance before bringing such laws, and take the opposition parties into confidence for the welfare of the country, the Sena said as it urged people to stand united against injustice and authoritarianism.

On November 19, Maharashtra Chief Minister Uddhav Thackeray, who is also the president of the Shiv Sena, had said, "The announcement of repealing the three farm laws underscores the power of a common man in the country. The Union government should hold talks and take other parties into confidence to avoid the afterthoughts and embarrassments like today." Many farmers were encamped at Delhi’s borders since November 2020 with a demand that the Farmers’ Produce Trade and Commerce (Promotion and Facilitation) Act, 2020, the Farmers’ (Empowerment and Protection) Agreement on Price Assurance and Farm Services Act, 2020 and the Essential Commodities (Amendment) Act, 2020 be rolled back and a new law enacted to guarantee the minimum support price (MSP) on crops.

The Centre, which held several rounds of talks with the protesting farmers, had maintained that the laws were pro-farmer, while the protesters claimed that they would be left at the mercy of corporations because of the legislations.