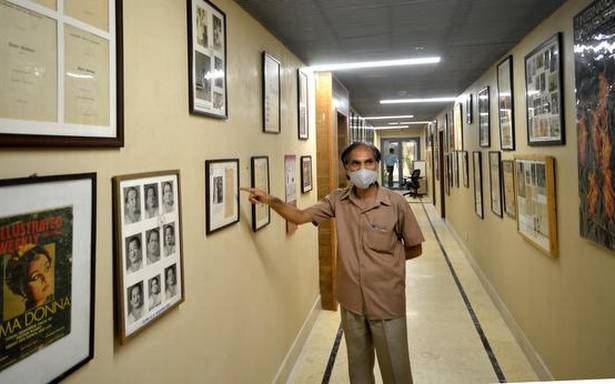 Exhibition on Chandrashekhar Azad, permanent gallery on Raja Deen Dayal in the offing

The new location of the Indira Gandhi National Centre for the Arts (IGNCA) on Janpath, which was inaugurated on July 1, could open its doors to the public next month, depending on the COVID-19 pandemic situation, according to officials.

Relocated to make way for the construction of new secretariat buildings as a part of the Central Vista redevelopment, the IGNCA would stay at what used to be Janpath Hotel for about two-and-a-half years while its own permanent campus at Jamnagar House was built, IGNCA member-secretary Sachidanand Joshi said on Friday. The hotel building was refurbished and an additional media centre, including an auditorium, was constructed by the Central Public Works Department, which is carrying out the Central Vista revamp.

“We are aiming to release a calendar of events for the year on August 1. Depending on the COVID-19 protocols in place, it would be a hybrid calendar, with both physical and virtual events,” Mr. Joshi stated.

While the old campus on Janpath had lawns, the temporary home of the IGNCA had rooftops and courtyards that would be used as informal spaces. Events like intimate music concerts, poetry readings and panel discussions could be planned on smaller scales. Apart from the IGNCA’s own calendar of events, it would also allow other institutions to use its space, as was the case in the old campus. Apart from a 170-capacity auditorium and 300-capacity amphitheatre, the new IGNCA location had conservation labs, gallery space, a library and a cafe, he added.

An exhibition on freedom fighter Chandrashekhar Azad and another on “tribal photographs” from Madhya Pradesh were being planned for later this month and August. A permanent exhibition dedicated to 19th Century photographer Raja Deen Dayal, including his photos, a camera and furniture, was also in the works, Mr. Pandya stated.

While the entire 1.10 lakh articles in the IGNCA’s collections had been shifted to the new location, as per Mr. Pandya, the library, cafe and storage sections were yet to be complete. Conservation equipment lined the corridors, while trucks continued unloading materials outside. Once completed, Mr. Pandya noted, students and researchers would be able to access the reserve collections through “visual storage” by appointment.