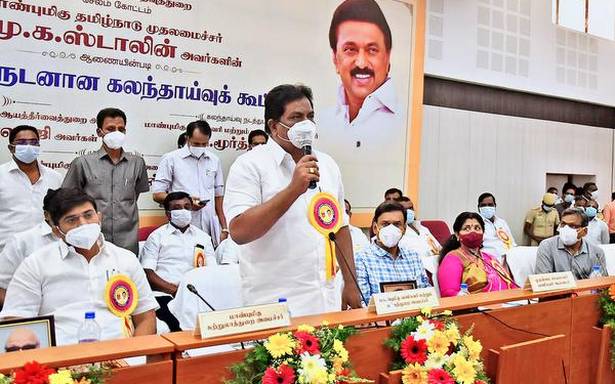 Minister for Commercial Taxes and Registration P. Moorthy said the department was mulling measures to make registration process easier and prevent the public from waiting for long hours at registration offices.

The public were forced to depend on document writers to get the process done. “We are planning measures where the public can come to a registration office and get done with the process within a short period rather than waiting for long hours,” Mr. Moorthy told presspersons.

The officials heard the grievances of traders, the challenges in businesses and GST issues.

The Minister said stern action would be taken against officials if they were found indulging in irregularities or malpractices. He added that they were planning to transfer officials, who had been working at the same place for 10-15 years, after seeking permission from the Chief Minister.

The State government would stand by businessmen who were conducting businesses honestly and action would be taken against those indulging in fake bill trading.

Genuine requests from traders and the public for reducing GST tax percentage on products would be raised by the State government at the GST Council, the Minister said.

Mr. Moorthy said suspensions and transfers had been effected in the Registration Department at places where irregularities had been found.

At present, sub-registrars did not have powers to nullify a registration and measures were being taken to give officials the power to cancel false registrations.

Minister for Tourism M. Mathiventhan, MLAs and MPs from the region were present.