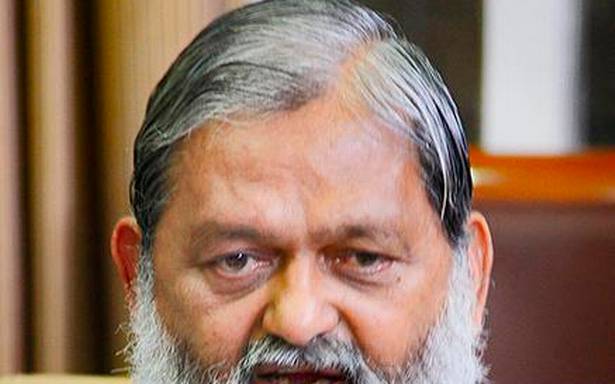 Minister’s comment comes in the wake of Friday prayer row

Amid the growing controversy over the offering of Friday prayers (Jumma Namaz) at public places in Gurugram, Haryana Home Minister Anil Vij on Sunday said that religious activities must be conducted inside religious places.

In his first ever comments on the namaz row, Mr. Vij said religious activities should be held inside religious places, adding that everyone should refrain from holding such activities on roads without the permission of authorities.

Hindu right-wing outfits in Gurugram have been demanding that Friday prayers should not be allowed at public places. The outfit leaders claimed that the permission granted for offering namaz at 37 designated public places three years ago was only for one day.

Meanwhile, Gurugram’s Muslim community, after several meetings over the last couple of days, has formed a 21-member committee under the leadership of former Rajya Sabha MP Mohammad Adeeb to talk to the administration on holding namaz in the open. The representation from Muslims staying across various sectors of Gurugram and Manesar has been taken for the committee.

“A five-member delegation from the 21-member committee shall meet the Gurugram administration on Monday and submit a memorandum for not reducing any site from the list of 37 open places agreed with them in 2018. Instead, we need more places in new sectors as more Muslim migrant workers have come in the past three years,” said Altaf Ahmad, a committee member.

“We shall also seek an appointment from the Chief Minister with an appeal to grant us land for building mosques in Gurugram as per town planning guidelines. We would also request for stern action against those who are working towards disturbing the communal harmony,” he added.